SINGAPORE - Jurong Country Club (JCC), identified as the site of the future terminus for the Singapore-Kuala Lumpur high-speed rail (HSR), is set to file its compensation claim on Nov 25.

JCC will submit its valuation of the 67ha site to the Collector of Land Revenue, it said in a statement on Thursday (Nov 19).

The Singapore Land Authority had gazetted the acquisition of the plot in May this year, with the club expected to hand over the land by November 2016.

Said JCC president Bobby Wee: "Working with our appointed valuers Knight Frank and our Acquisition Task Force which includes several valuation experts, we have been painstaking and meticulous in our efforts to value the club correctly. 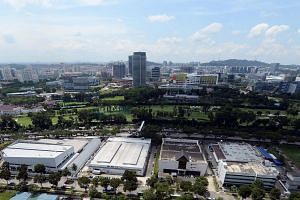 "We have a duty to the State to arrive at a claim for compensation that is responsible and fair. No amount of money will compensate our members for what we are losing, but we do hope for a just and equitable compensation that fairly reflects the losses brought about by the compulsory acquisition - which has in effect terminated our lease 20 years early."

The club had held a dialogue session for 400 of its members on Aug 25, during which many of them raised concerns that they may not be adequately compensated for intangible losses.

With the HSR terminus expected to occupy only about 12ha - or around 18 per cent - of the total area, the remaining land will be transformed into a mixed-used development comprising offices, hotel, retail spaces and residences.