SINGAPORE - Tickets for Shuttle Tebrau, the shuttle train between Woodlands and Johor Baru Sentral, will no longer be available online from Dec 1. Commuters also will not be able to book tickets in advance.

Instead, ticket sales will only be released at 8.30am one day before departure, and will only be available at KTM Intercity counters. Sales will be limited to four tickets per person.

The tickets were previously available 30 days in advance online and at ticket counters.

Malaysian rail operator Keretapi Tanah Melayu (KTM), which runs the service, explained that the change is to avoid the abuse of ticket sales and overcrowding trains. This is to ensure that all passengers have valid tickets to board the train. 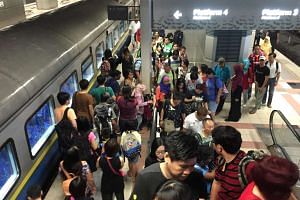 Touts in Malaysia behind pricey train ride from Johor to Singapore

The Shuttle Tebrau was launched in July last year to ease traffic congestion along the Causeway.

The train takes five minutes to travel between JB and Woodlands. Each trip, costing RM5 (S$1.80) from JB and $5 from Woodlands, caters to about 320 passengers. The number of daily trips was increased from 14 to 22 in January this year.

Some commuters complained about the changes on the KTM Berhad Facebook page.