Heavyweight mobile cranes are likely to be allowed to move faster on the road.

The Land Transport Authority (LTA) said yesterday that a trial commencing on Friday will allow mobile cranes with a laden weight exceeding 24,000kg to be driven at 40kmh.

Currently, such cranes have a speed limit of 20kmh.

The LTA said it had received feedback from the industry that the speed limit of 20kmh "is too low, resulting in longer travelling time on the road which may cause driver fatigue".

It added: "This decision takes into account improvements in vehicle technology and design that allow mobile cranes to travel safely at higher speeds." It is also in line with the practice in other places such as Australia, Hong Kong and Britain.

Separately, the LTA said the current 70kmh speed limit for eight-seater passenger cars will be lifted.

The authority cited "advancements in vehicle safety standards" for doing away with the limit from Friday. 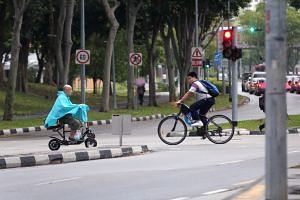 Insufficient signs on roads to remind drivers of speed limits

"With this change, eight-seater passenger cars will be required to observe only the same road speed limits as other passenger cars. This is in line with the practice in other countries," a spokesman added.

This change is not expected to affect many cars, as eight-seater passenger vehicles form a small percentage of cars here.

Diversified Prime group, for instance, said eight-seaters made up 8 per cent of its total passenger car sales of 400-plus in 2017.

Nissan agent Tan Chong Motor said these cars made up less than 1 per cent of sales last year.

Industry players also said that it was near impossible to enforce the 70kmh speed limit because the vehicles were identical to their seven-seater variants.

A version of this article appeared in the print edition of The Straits Times on January 30, 2019, with the headline 'Higher speed limits for 8-seater cars, likely for some cranes too'. Subscribe
Topics:
More
Whatsapp Linkedin FB Messenger Telegram Reddit WeChat Pinterest Print Purchase Article Copy permalink