Commuters say they value sleep more than savings, there is no work to do at that time

Commuters to the city in the morning rush hour are not keen to travel earlier to get free train rides because the allure of any money saved and more space on the train is outweighed by an extra hour of sleep, according to those interviewed.

Many also said it was pointless to go in earlier as there would be no work to do, or they are afraid of appearing to outdo their colleagues by getting in early.

The Land Transport Authority (LTA) announced on Thursday that it would continue a scheme that gives free rides to 18 MRT stations before 7.45am on weekdays.

Commuters who arrive at those stations, which include Dhoby Ghaut, Marina Bay and Telok Ayer, between 7.45am and 8am will also get up to 50 cents off their fare.

The scheme is aimed at easing peak-hour congestion on trains. 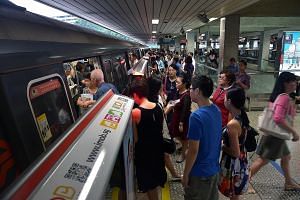 The LTA said 7 per cent of commuters have consistently switched away from travelling during the morning peak hours. But of the 40 commuters The Straits Times spoke to over two days, only five changed their routine for the perk. The other 35 either already go to work early or are not enticed by the scheme.

"If I go in early, I can get more work done but everyone comes in and leaves at the same time. Why spoil the market?" said Mrs Esther Goh, an accountant in her 30s, using the local phrase for making others appear less hard-working.

But some agreed they would get up earlier if their employers encouraged and recognised the effort and let them leave early, or if they felt it would serve a good cause.

Mr Daryl Tan, 23, who takes the train to Raffles Place to get to his bank job, said he would travel earlier if he felt he was "saving the environment". But for now, he has no motivation to change his routine.

"To take advantage of the scheme, I have to tap out (of the station) before 8am. That's one hour earlier than the time I need to reach the office. Sacrificing one hour of sleep is not worth saving the $1.50 on my fare," he said.

The main factor in getting more people to travel early is cooperation from companies, said recruitment firm owner Alvin Ang. Employees who are not allowed to leave early even if they start early have no incentive to change their habits.

Some form of job redesign to support a change may be necessary, said Mr David Ang, director of corporate services at human resources firm Human Capital Singapore, but industries that deal with overseas markets may have less flexibility.

One commuter who has made the switch is operations manager Vincent Teng, 31. "I started (doing so) because it cut my transport cost, but it's also less of a hassle to travel before the peak hours," he said.

"I don't know about companies that give their employees early time out for coming in early, but it would be encouraging for more people to use the early trains if more companies do so."

Ms Charlene Sia, 28, has been taking advantage of the free travel for about a year. Instead of going for yoga sessions in the evening, the tax associate attends early morning classes. "I feel more alert at work now because the exercise helps. Also, I used to be too tired to exercise after work, so this is a good way for me to make sure I do it," she said.

She has saved about $100. She used to spend about $5 a day taking a private bus from her home in Pasir Ris to her office in Raffles Place.

A version of this article appeared in the print edition of The Straits Times on June 25, 2016, with the headline 'Get up early for free MRT rides? Yawn'. Subscribe
Topics:
More
Whatsapp Linkedin FB Messenger Telegram Reddit WeChat Pinterest Print Purchase Article Copy permalink