An MRT tunnel flooding incident which left a section of the North-South Line (NSL) inoperable for 20 hours earlier this month was "preventable", and the SMRT team in charge of maintaining the anti-flood measures "has failed us".

Transport Minister Khaw Boon Wan said this yesterday during a press conference together with officials from the Land Transport Authority (LTA) and train operator SMRT, which runs the NSL.

"Our findings are that the anti-flooding system there had been poorly maintained... The SMRT team in charge of maintaining the anti-flood system at Bishan has failed us," he said, adding that the incident "should not have happened" and "we are all sorry that it did".

Mr Seah said the incident will have an impact on the bonuses of the SMRT maintenance team. Mr Kuek said SMRT was taking full responsibility and looking into tackling remaining "deep-seated cultural issues" within the company, despite progress on instilling a positive work culture.

"Indeed, many of our major disruptions in the past have been attributed in some part, or all, to human error or failure. We regret that this is so," said Mr Kuek. SHOULD NOT HAVE HAPPENED

The incident on the evening of Oct 7 was preventable. It should not have happened. We are all sorry that it did... Our findings show that the anti-flooding system there had been poorly maintained... The SMRT team in charge of maintaining the anti-flooding system at Bishan has failed us. Basically, MRT tunnels are designed to handle our weather, and can cope with very extreme storms, far more severe than what we experienced in the last two weeks... (The) bottom line is that MRT tunnels should not be flooded. Full stop.

It may not end up as one person. There will be a whole process of disciplinary proceedings and investigations that we will have to allow to take its proper course.

SMRT GROUP CHIEF EXECUTIVE DESMOND KUEK, when asked about the company's removal of a senior executive over the tunnel flooding incident.

We are sorry for the inconvenience caused to all our commuters... SMRT has failed to prevent this incident from happening. SMRT takes full responsibility for this incident. SMRT wants to, and aims to, make things right for our commuters. We are very determined to put in all necessary resources to improve maintenance and to cut down disruptions and train breakdowns. 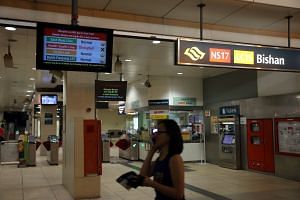 Bonuses for team at fault 'will be affected'

SMRT, LTA have to get to root of the problem

Investigations after the Oct 7 incident found that a storm water pit in the tunnel between Bishan and Braddell MRT stations - designed to collect and pump out rainwater - was likely close to full before the recent flooding incident.

It was also found that due to the maintenance lapse, sludge and debris had accumulated in the lower compartment of the water pit, which could have affected the operational capabilities of pumps and float switches. They were to be inspected and maintained last month, but this was postponed as the maintenance team claimed it could not get a slot for track access during engineering hours.

The failure of the float switches resulted in water flooding the tunnel between Bishan station and the underground Braddell station. The water had to be manually pumped out through the night, with help from the Singapore Civil Defence Force and PUB.

NSL services in both directions, between Ang Mo Kio and Newton MRT stations, were down from 5.30pm on Oct 7, and resumed only at 1.36pm the next day. A quarter of a million commuters were affected.

Mr Lee said SMRT will conduct checks on water pumps and flood sensors more rigorously - on a monthly basis instead of every quarter currently. The flood-prevention devices that failed were last inspected in June.

SMRT will also work with LTA to improve the redundancy of flood prevention measures, including additional radar sensors to activate pumps. On top of alerts sent to the operations control centre, SMS messages will also be sent to SMRT staff when water in the storm pit reaches a certain level.

The pump control panel will also be re-located so that track access is not required to manually activate the water pumps, said Mr Lee. LTA added that it will send the failed float switches for further testing.

Mr Khaw said that MRT tunnels are designed to handle Singapore's weather and cope with very extreme storms. "(The) bottom line is that MRT tunnels should not be flooded. Full stop," he said.

MP Sitoh Yih Pin, chairman of the Government Parliamentary Committee for Transport, said he hopes SMRT can strengthen its system of "checks and balances". "It cannot be that just because one department or a group of people didn't check the water pump, the whole system fails," Mr Sitoh said.

Mr Seah said SMRT has added more staff to its inspectorate teams, which check all work done and reports independently to an audit and risk management committee.

MRT tunnel flooding: How it happened