2getthere and unit, Frog, filed for insolvency in 2007; SMRT says only Frog had problems

The Dutch company which transport operator SMRT joined hands with two weeks ago to provide automated shuttle services may be in financial difficulty.

Checks by The Straits Times revealed that 2getthere and its driverless freight-moving unit, Frog, had applied for insolvency in April 2007.

The company, led by Mr Carel van Helsdingen, has since been looking for financial backers.

Even so, the financial status of 2getthere remains murky. The company did not respond to queries from The Straits Times. 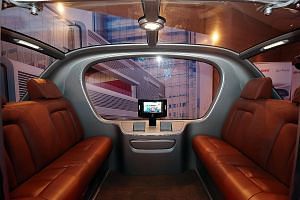 But SMRT Services managing director Colin Lim said it was Frog that had financial difficulties and "2getthere was not part of it".

Following a restructuring, 2getthere was formed as an independent company in 2008, Mr Lim added. "Based on 2getthere's records, the company has been profitable," he said, adding that SMRT had conducted its due diligence.

Indeed, 2getthere reported on its website in January that UTS had "taken a stake" in the firm, but it gave no details about the size of the stake or worth of the investment.

Observers reckon the Dutch company may well be selling a stake to SMRT too. SMRT would not comment when asked this week if it had injected cash into the company.

At its post-results briefing last week, SMRT said 2getthere Asia, its new venture - of which it owns 51 per cent - with the Dutch company, will not have any immediate contribution to its bottom line.

It added that the venture was "part of a larger national push for first- and last-mile initiatives".

But the application of such driverless systems - broadly termed as PRT or personal rapid transit - has been confined so far to semi-controlled environments such as airports, business parks and in Masdar City, an artificial city in Abu Dhabi. In Masdar, 2getthere's US$10 million (S$13.6 million) project has not progressed beyond the pilot stage, purportedly because of the high cost of laying the buried guideways that the driverless pods travel on.

Even its maiden project in its home country got off to a patchy start. Just days after the official launch of service at the Rivium Business Park in Rotterdam in December 2005, two empty pods collided.

Many transport experts say PRT systems are not feasible, which explains why they are not popular at all. Professor Vukan Vuchic of the University of Pennsylvania described them as a "totally unrealistic 'Buck Rogers' concept for which there are no applications where it would be operated efficiently and economically".

SIM University Adjunct Associate Professor Park Byung Joon said PRTs may work in an airport but he is "less convinced whether they work as part of public transport".

A version of this article appeared in the print edition of The Straits Times on May 05, 2016, with the headline 'Dutch firm in SMRT deal may have money woes'. Subscribe
Topics:
More
Whatsapp Linkedin FB Messenger Telegram Reddit WeChat Pinterest Print Purchase Article Copy permalink