In the three weeks since Grab announced it was taking over Uber's operations in the region, part-time private-hire driver William Lim has seen his takings plunge.

While he was previously able to bring in upwards of $300 a week driving for both Uber and Grab, he is now barely able to hit $200.

He said there have been fewer bookings on both platforms since the deal was announced, and cited the influx of drivers migrating from Uber to Grab as a possible reason.

This has led to fewer users on Uber, and more competition for rides on Grab, he said.

"Now, it is hard to get even one passenger per hour," he said.

Mr Lim, 38, welcomed yesterday's move by the Competition and Consumer Commission of Singapore (CCCS) to extend Uber's services until May 7, instead of this Sunday.

I just hope Grab's prices will not increase once Uber stops operating.

ACCOUNTANT FAITH TAN, who said she will continue to compare prices between the two apps as long as they are both available.

The directives issued by the CCCS yesterday to keep the private-hire car market open while it investigates the merger also require Grab not to lock drivers into exclusivity obligations.

For example, it wants Grab and Uber to ensure that drivers renting their vehicles from Lion City Rentals (LCR) can drive for any platform they choose. According to drivers, the company, which previously had an exclusive rental agreement with Uber, is now an exclusive partner of Grab's.

Ms Yvonne Ng, 38, a part-time driver who rents her vehicle from LCR, welcomed the move, adding that she hopes this will allow her to drive with other ride-hailing firms in the future as well.

While Ms Ng prefers driving for Uber, citing better incentives and fewer restrictions, she will drive for Grab once Uber stops, in order to maintain this source of income.

Mr Ang Hin Kee, executive adviser to the National Private Hire Vehicles Association, said LCR should allow Uber drivers who do not wish to keep driving for Grab to opt out of their rental agreements without penalties.

"As a goodwill measure, LCR should allow people who don't wish to continue driving to return their cars," he said.

Grab said last week that "thousands" of Uber drivers had signed up with the Singapore-based firm following the announcement of the deal between the two ride-hailing giants.

Commuters, however, were not too concerned with the measures put forward by the CCCS.

Accountant Faith Tan, 27, said she would continue to compare prices between the two apps as long as they are both available. 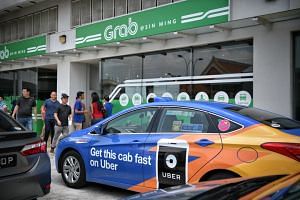 "I just hope Grab's prices will not increase once Uber stops operating," she said.

Mr Ang, who also advises the National Taxi Association, welcomed the directive that taxi drivers be free to drive for any platform.

The move prompted the Land Transport Authority (LTA) to issue a warning to Grab that taxis should offer only metered fares unless their firms had "endorsed Grab to offer flat fares on their behalf".

ComfortDelGro was the only cab company not to partner with Grab when JustGrab was introduced last year.

In a statement yesterday, the LTA said it was reviewing the regulatory framework for the point-to-point transportation sector and would work with taxi firms and private-hire operators to "operationalise" the CCCS' requirements.