A newbie - Auto Rider - has joined the growing number of driverless vehicles on the roads in Singapore. Auto Rider is targetted at visitors to Gardens by the Bay that will take them around the sprawling grounds.

We look at this and some of the other driverless vehicles which have been launched here and overseas.

Visitors to Gardens by the Bay will be able to hop on to two driverless shuttles from as early as December, thanks to two memoranda of understanding (MOU) between the Transport Ministry and port operator PSA as well as Sentosa Development Corp and ST Engineering.

Called Auto Riders and launched on Oct 12, 2015, the driverless shuttles can each accommondate 10 people and are wheelchair-accessible, with a motorised ramp that deploys and retracts at the touch of a button. The vehicles, which have been tested in Switzerland, are making their Asian debut in Singapore as part of a multi-agency autonomous vehicle trial.

The Nanyang Technological University was the first to launch a trial for driverless vehicles in Singapore. In August last year, it started road-testing a driverless shuttle in partnership with JTC Corporation and Induct Technologies.

The shuttle, named NAVIA, can carry eight passengers and go up to 20.1kmh.  It runs on electric batteries and will follow a pre-programed route between NTU and JTC's CleanTech Park.

The vehicle is also a testbed for research by the Energy Research Institute @NTU, which will be developing and testing new charging technologies for it. 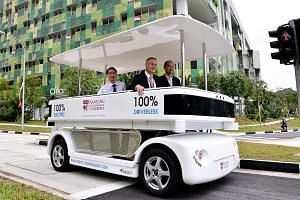 Five facts about driverless cars, which may soon be plying Singapore's roads

Still in its R&D phase, the shuttle has yet to run as a regular service.

The National University of Singapore, in collaboration with the Singapore-MIT Alliance for Research and Technology, launched its own Singapore-made car in January this year.

Named the Shared Computer Operated Transport (Scot), the vehicle is actually a Mitsubishi i-MiEV electric car which the researchers retrofitted at a cost of $30,000. It seats four and can reach a top speed of 130kmh.

It is equipped with laser sensors which have a 30m range to help it avoid obstacles. It also has remote sensing technology that allows the vehicle to navigate without using the Global Positioning System.

This is the successor to the driverless golf buggies which will be road-tested later this year.

The company launched 100 vehicles at its California headquarters on May 27. The cute little two-seater has only a panic button and a start button, no steering wheel or pedals. Its top speed is limited to 25mph (40kmph).

Watch a video of the car going on a test drive with people on YouTube.