Driverless road-cleaning vehicles could hit Singapore's streets in the coming years, with two consortiums being awarded projects to develop and test such vehicles.

Dubbed autonomous environmental service vehicles, the projects will be the first under the National Environment Agency's (NEA) environmental robotics programme which it introduced in 2017 to enhance productivity.

NEA and the Ministry of Transport (MOT), which revealed the projects yesterday, said: "Each consortium will only be allowed to commence trials on public roads at designated AV test sites, such as one-north, after they have successfully passed a rigorous safety assessment."

The two bodies said a safety driver will be required to be on board to take control of the vehicle in case of emergencies.

"The successful application of AV technology to mechanical road sweepers will enable service providers to adopt innovative technology and better solutions to improve productivity and deliver quality services in the ES (environmental service) industry," they added.

With reduced reliance on manpower, we can potentially shift road-cleaning activities to the night and reduce congestion during the day.

MR LOH NGAI SENG, Ministry of Transport Permanent Secretary and chairman of the Committee of Autonomous Road Transport for Singapore.

The two proposals were selected out of a total of eight submitted following a request for proposals in 2017. The projects will be carried out over the course of 18 months, made up of a one-year development phase and a six-month proof-of-concept trial, which is expected to begin next year.

Each consortium will develop one vehicle, which will first be tested at the Centre of Excellence for Testing and Research of Autonomous Vehicles - NTU, located on the university's outskirts.

NEA and MOT noted that the use of AVs for such purposes is in line with a road map developed by the Committee of Autonomous Road Transport for Singapore (Carts), formed in 2014 to chart the direction of self-driving technology here. 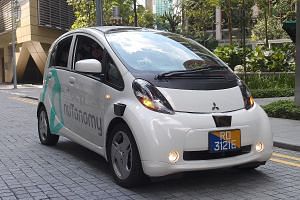 Standards drawn up for safe use of fully autonomous vehicles

NEA chief executive Tan Meng Dui said the projects would "further automate road cleaning, by catalysing the local robotics industry to build up expertise and experience in delivering environmental robotic solutions, which can then be commercialised and potentially exported".

"Deploying AV technologies goes beyond enhancing the accessibility and connectivity of our transport system," said MOT Permanent Secretary Loh Ngai Seng, who is also chairman of Carts. "With reduced reliance on manpower, we can potentially shift road-cleaning activities to the night and reduce congestion during the day."

Separately, ST Engineering announced on Wednesday that it had tied up with Chinese electric vehicle maker BYD to vie to deploy driverless buses in Punggol, Tengah and the Jurong Lake District, as part of a trial which is expected to begin in 2022.