The length of the cycling network in Tampines will be tripled by 2022, with footpaths widened and roads redesigned to make walking and cycling safer and more convenient.

In five years, trunk cycling routes will also connect residents to the neighbouring towns of Simei and Pasir Ris, and to Changi Business Park and Singapore Expo Convention and Exhibition Centre.

These plans to help Tampines go "car-lite" and transform it into a walking and cycling town were unveiled by the Land Transport Authority (LTA) yesterday.

By 2022, the biking network will be boosted from 6.9km to about 21km, linking the town's three MRT stations to homes, schools and other amenities.

The LTA said existing cycling paths in Tampines will be widened and bicycle crossings improved, with more signs and markings. It is also studying the feasibility of constructing a cycling bridge over the Tampines Expressway to link Tampines and Pasir Ris, and a cycling underpass to Simei.

Pedestrians will also benefit with wider footpaths and barrier-free ramps planned. Roads will have features such as two-stage crossings, so the elderly can take a breather. 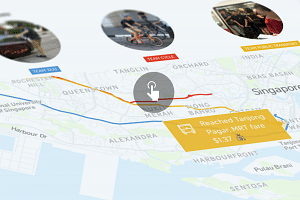 The measures are expected to boost the take-up of cycling in Tampines, dubbed Singapore's first cycling town. Amended by-laws in 2010 allowed cyclists to share pavements with pedestrians.

About 2.4 per cent of all trips in the town are made by bicycle, higher than the national average of 1.5 per cent.

The LTA said Tampines was chosen "in view of the projected increase in residential population, with the upcoming new developments and launch of the Downtown Line 3 MRT stations". The upcoming Tampines North is expected to add 21,000 new homes, based on the 2013 draft masterplan.

The LTA called a tender yesterday for a design consultancy for the project.

Former three-term MP for Tampines GRC Irene Ng said the new plans will put Tampines on the path to be a "great cycling town", and while pilot initiatives to raise the adoption of cycling started in 2007, it was clear there needed to be a "seamless network" in the long run. She said education and enforcement must accompany the infrastructure, to promote safe cycling.

Mr Michael van Eggermond, a senior researcher at Future Cities Laboratory, said the authorities could look into building cycling paths on both sides of the road, and on secondary roads leading to key amenities such as schools. "It offers more choice in routes and convenience in getting to your destination."

Madam Chong Sook Fong, 61, a retiree, said: "It is good that the paths will be widened. Sometimes, there are big groups of students walking together and blocking the way."

The Government aims to construct cycling paths in all 26 Housing Board towns by 2030, and has completed eight so far.

A version of this article appeared in the print edition of The Straits Times on September 26, 2017, with the headline 'Cycling network in Tampines to be tripled by 2022'. Subscribe
Topics:
More
Whatsapp Linkedin FB Messenger Telegram Reddit WeChat Pinterest Print Purchase Article Copy permalink