Motorists can pay for parking and extend sessions via their mobile phones at 1,100 carparks

Scouring for parking coupons or looking for another driver to buy them from will now be a thing of the past.

It can be used at all 1,100 carparks which still require coupons. Through the app, motorists can use their credit or debit cards to pay parking charges.

The app, however, can be used only for cars and light goods vehicles for now.

The scheme will be extended to motorcycles and heavy vehicles by the end of the year, the Housing Board, the Urban Redevelopment Authority (URA) and the Government Technology Agency of Singapore said yesterday.

The agencies added that even as the new app is rolled out, paper coupons can still be used.

The app will automatically calculate parking fees based on 30-minute blocks, but if motorists move their vehicles out earlier and end the session, they will be charged on a per-minute basis and get a refund.

This will prevent overpaying.

Under the coupon system, motorists pay 60 cents for 30 minutes, even if they leave earlier.

The app, which will be available from the Apple App Store and Google Play Store, will also alert motorists when their parking sessions are about to expire. Instead of running back to their vehicle to display more coupons, they can extend their sessions through the app.

Parking.sg is part of Singapore's drive towards becoming a Smart Nation. Trials, involving more than 15,000 public officers and selected members of the public, were conducted in two phases - from May to June and from July to this month. 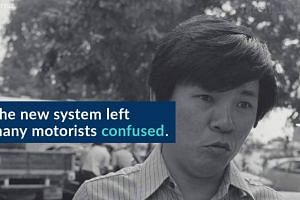 Parking app to replace coupons: All you need to know about the humble parking coupon

From the feedback, features such as parking history, which shows a user where and when he has parked before and for how much, were added.

To pay for parking with the app, motorists will have to key in their vehicle number, the parking duration as well as a carpark code.

They will be given a list of carparks nearby which they can select from when they enable the location function in their mobile devices.

The HDB and URA said they have put up additional signs at carparks that will reflect their unique code.

Enforcement checks by parking wardens will continue, added the authorities, reminding motorists to activate their Parking.sg app after they have parked their vehicles.

Sales manager Wandi Sani, 36, said he would give the new app a go. "There is no need to rush back to put a new coupon if I overstay. Plus, it can be tedious peeling off the tabs on parking coupons and sometimes I make a mistake and I waste the coupon."