SINGAPORE - Commuters reported delays on the Downtown Line 3 on Saturday (Oct 21) just hours after the new line opened its doors to the public.

On Facebook, some commuters posted photos and said they were "stuck" at various stations including Bedok North station and Mattar station.

SBS Transit's senior vice-president of corporate communications Tammy Tan told ST that a defective train was withdrawn from service at the Tampines West Station, which caused a delay of about five minutes.

"Following this, a passenger activated the emergency communication button on another train as it was approaching the Tampines East Station. This added a further delay of about 15 minutes," the spokesman added.

ST reader Jeremy Chua, a 28-year-old operations executive in the marine industry, wrote in to say the train had stopped at Promenade station and moved only after 20 minutes.

Commuter Lim Yu Ke told The Straits Times that he was on his way to Tampines from Jalan Besar on the Downtown Line around 2pm when he was caught in the delay for about 30 minutes.

"The journey from Jalan Besar to Tampines was supposed to be 19 minutes, (but the) delays started from Kaki Bukit," said the 25-year-old student.

He said announcements were made in the trains informing commuters of a "train fault", and the train he was on stopped for about five minutes per station from Kaki Bukit to Tampines.

"(I) thought there was going to be a faster journey, but nope," said Mr Lim.

He added that he was caught in another delay on Friday on the East-West Line.

"I would still prefer to use buses running on the expressway for faster journeys," said Mr Lim. "At least they're more reliable than the trains." 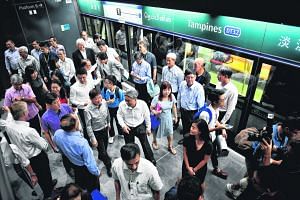 Downtown Line 3, which is managed by SBS Transit, has 16 stations from Fort Canning to Singapore Expo.

Rides on the Downtown Line are free this weekend for the first two days of the DTL3's opening.

SBS Transit said it is investigating the cause of the fault.