SINGAPORE - Certificate of Entitlement (COE) prices finished mostly higher in the latest tender as the market anticipates a smaller supply of COEs in the three-month period starting in May 2019.

Prices for open category COEs - which can be used to buy any vehicle type except motorcycles but which end up being used mostly for bigger cars - closed at $41,000. This is a 9 per cent increase from the $37,620 registered in the previous bidding exercise.

Singapore Vehicle Traders Association president Michael Lim said dealers are likely rushing to bid for COEs now as they anticipate a smaller supply in the May to July period, compared with the current February-April period.

The COE quota is revised on a quarterly basis and is determined largely by the number of vehicles deregistered in the preceding three months.

Mr Lim said: "The number of cars being scrapped in the past two months has fallen." 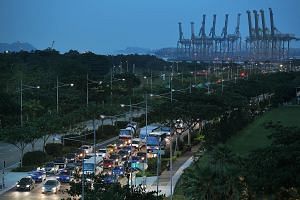 Data from the Land Transport Authority (LTA), for example, show that there were around 4,690 cars above 1,600cc or 130bhp which were deregistered in January and February 2019. In the same period a year ago, more than 5,480 of these cars were taken off the road.

Yong Lee Seng Motor's managing director Raymond Tang reckons that more drivers are opting not to deregister their cars, but to renew their COEs when they expire after 10 years.

Motor traders also say there is a higher demand for cars above 1,600cc or 130bhp compared with those of smaller capacities and lower horsepower.

Mr Tang noted that many of the popular car models are hybrids, like the Honda Fit Hybrid, which though regarded as a small car exceeds the 130bhp criteria.