A signalling glitch affecting the Circle Line remained unresolved for a second day yesterday, as operator SMRT said it was working with the Land Transport Authority and systems supplier Alstom to fix the flaw.

The Straits Times understands the system stabilised on Monday evening, but the glitch resurfaced yesterday morning to the ire of commuters. One tweeted at 7.24am asking why there were no announcements about the delay. "The train is not moving between Holland Village and Farrer Road," he posted.

Others said trains had stopped at stations for extended periods. User Alex Hilton tweeted at 8.37am: "Singaporeans. Avoid Circle Line interchange at Botanic Gardens this morning."

SMRT said it had been "carrying out tests and investigations overnight into the signalling issues that affected train services on the Circle Line". 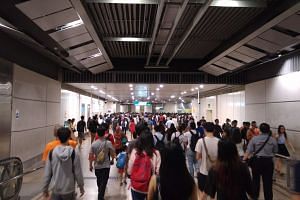 Intermittent signal issues cause of delays on Circle Line; more delays expected throughout the day: SMRT

At around 5pm, the operator tweeted to warn that journeys on the line would take up to 10 minutes longer. It also reminded standing commuters to hold on to handrails as the trains may brake "intermittently".

In November 2012, when the line was about three years old, the LTA decided to replace 120km of its power supply cables. The work cost $15 million and took a year and a half to complete