Changi Airport's Terminal 4, which turns one on Wednesday (Oct 31), has seen over eight million passengers in the first year of operations - about half of its total annual capacity.

Since it opened on Oct 31 last year, the facility has handled over 43,000 flights and processed 2.2 million check-in bags, Changi Airport Group (CAG) said.

Apart from adding capacity to Changi, T4 is an opportunity to test new technology and systems that could potentially be used airport-wide. For instance, start-to-end automation, which is not currently available at the other three terminals, allows travellers to carry out their own check-in, bag-tagging, immigration clearance and auto-boarding.

In a first for Changi, the new terminal also uses a facial recognition system that captures a passenger's photo at different stations, as well as centralised security screening.

The new processes and systems allow T4 to achieve efficiency and manpower savings of up to 20 per cent.

Along the way, enhancements have been made to help travellers adjust to automation.

For example, instructions on how to tag bags now use more images rather than text, making it easier for passengers to grasp, said Mr Albert Lim, CAG's senior vice-president of passenger experience.

"We are making another enhancement to enable more languages to be displayed at the automated immigration gates," he said.

When a passport is scanned, the system detects the passenger's nationality and displays messages in the appropriate language. 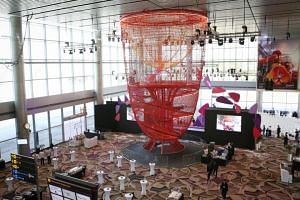 "This will help foreign passengers feel more at ease when going through the automatic immigration clearance, as well as speed up their clearance process," he added.

The changes will be introduced by the end of the year and will offer Chinese, Bahasa Indonesia and Thai, in addition to English, at the start.

Refinements to processes and systems will continue at T4, said the airport.

With the new terminal being a "live" test bed for new concepts, innovations and technology for the other terminals and the future T5, passengers can expect more new features and improved efficiency.

From nine airlines at its opening, there are now 12 carriers operating from the facility, which is a shuttle bus ride from the other three passenger terminals.

A spokesman for Cathay Pacific said moving to T4 has been good for customers. "The queuing time for check-in has shortened significantly and passengers now have more control of their journey," said the spokesman. "The automated boarding gates have also reduced the boarding time from 30 minutes to 15 minutes."