SINGAPORE - Errant personal mobility device (PMD) users beware: There are more ways now for those behaving badly to get caught in the act.

The Land Transport Authority (LTA) did not state the number of mobile CCTV cameras and their exact locations.

Members of the public can also now submit photos or videos of errant PMD users through the LTA's MyTransport.SG app, which has about 700,000 users currently.

As of 5pm on Wednesday evening, the LTA has received 30 reports of errant PMD users through the app.

LTA said the new feature will help identify errant riders and potential hot spots, and will add on to its enforcement efforts.

The CCTV cameras are part of an 18-month trial, in collaboration with the Government Technology Agency.

The LTA had said earlier this month that examples of locations where they will be installed include Jurong West, Punggol, Sembawang and Woodlands.

Each CCTV camera will have an accompanying sign to inform PMD users of its presence. 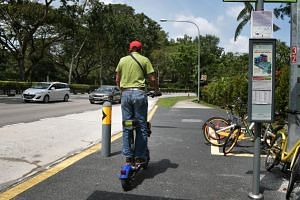 Don't hate the PMD, blame the rider and pavement design

Errant riders captured by the cameras during the trial period may face further investigation and prosecution.

The cameras will complement LTA's compulsory registration regime for PMDs and power-assisted bicycles by identifying errant devices through their unique device identification marks.

Each registered PMD must display a distinct label of their registration number, under the regime that kicked in this month.

More than 85,000 e-scooters are now registered with the LTA.

An LTA spokesman said: "LTA is leveraging technology to expand its enforcement presence and serve as visual deterrence to errant behaviour.

"This will help to alleviate some of the constraints faced in the manpower intensive enforcement deployments."

LTA also said footage from the CCTV cameras will allow it to assess interactions between the different road users.

This would let the authority respond with mitigating measures, such as infrastructural improvements, and to better target any outreach efforts to reduce conflicts, LTA said.

E-scooter user Randall Kho, an administrator at the Fiido eScooter Singapore Facebook group with more than 2,000 members, said that while the CCTVs might help to improve safety around PMD use, the money used could be better spent on outreach efforts to educate PMD users about safe riding practices.

But he added that the in-app reporting function was a great move to target errant users.

He said: "Personally, I would definitely use the app reporting function for those who breach the rules, such as those who ride on the road or ride recklessly.

"But there will definitely be people who will abuse the app."