The current fare formula could be tweaked, as the Government starts taking over the ownership of buses and collecting fare revenue next year.

Mr Richard Magnus, who chairs the Public Transport Council, said his panel will have to start re-examining the fare formula "quite quickly" as the Government shifts to the bus contracting model next year. He added that the review will start before 2017.

Aimed at raising service standards while ensuring the long-term viability of operators, the bus contracting model will mean that local and foreign operators bid for the right to operate routes in a competitive tendering system, with the fares collected going to the Government. 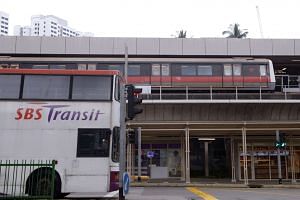 This has raised the possibility that the fare formula could change.

But Mr Magnus did not commit to whether the current fare formula will definitely change, saying only that the panel will have to "look at various indexes".

We have quite a good formula, at least for now. It's published for all to see. So commuters know, operators know, stakeholders know exactly what the fare-based model is all about. You don't have that in a fee-based model.

Currently, the annual fare revision exercise is based on a formula that takes into account changes in inflation rate, wages and an energy index that charts oil and electricity costs. The first two components are given a 40 per cent weighting each, while energy has a weighting of 20 per cent.

According to Mr Magnus, the fare-based model is one of three in the world. The other two are the fee-based (for more than two players in the market) and monopoly (a nationalised transport system) models.

Calling Singapore's model "certain, clear and transparent", Mr Magnus said: "We have quite a good formula, at least for now. It's published for all to see. So commuters know, operators know, stakeholders know exactly what the fare- based model is all about. "You don't have that in a fee- based model."

Mr Magnus also announced that bus and train card fares will dip by 1.9 per cent from Dec 27.

About 2.2 million commuters will see their bus and train card fares drop by up to four cents a journey.

It is the first time since 2010 that fares are being cut, in tandem with falling energy prices. The previous two adjustments saw fares rising by 3.2 per cent and 2.8 per cent, respectively.

Most commuters whom The Straits Times spoke to cheered the cost savings, even if they may not amount to much.

Bank officer Judy Teo, 29, who takes the bus from her home in Telok Blangah to her Shenton Way office every day, said she is likely to save about $1.50 a month. "It may not be much but our bus and train fares are already quite low."

Account executive Terence Kua, 32, who spends about $86 a month on his daily bus and train trips to and from work in Lavender, said: "Paying lower fares is great, but it is more important that commuters can continue to rely on public transport and service standards will go up."

CORRECTION: An earlier version of this story stated that the current bus fare formula could be tweaked as early as 2016. While the Public Transport Council chairman Richard Magnus said that the review of the fare formula will take place before 2017, the council has clarified that the fare formula is valid from 2013 to 2017.

Paying less on buses and trains

A version of this article appeared in the print edition of The Straits Times on October 24, 2015, with the headline 'Bus fare formula may be tweaked as early as 2016'. Subscribe
Topics:
More
Whatsapp Linkedin FB Messenger Telegram Reddit WeChat Pinterest Print Purchase Article Copy permalink