The stricter vehicle emissions standards that will kick in in two weeks are offering car buyers here some bargains, but also triggering a few headaches.

Though buyers are finding discounts as dealers rush to sell off models that do not meet the new standards, they are also finding that some popular models are no longer available at showrooms.

Dealers told The Straits Times that they have stopped taking orders for certain car models as stock complying with the emissions standards have yet to arrive.

From next month, dealers may sell only petrol vehicles that meet Euro 6 standards - vehicular emissions standards as defined by European Union directives - a move first announced by the National Environment Agency (NEA) three years ago.

A spokesman for motor distribution giant Inchcape said non-compliant models of its Toyota and Suzuki cars have been sold out since June. Inchcape did not specify which models it stopped taking orders for but a check on online car portal sgCarMart shows that the Suzuki Swift, for instance, is no longer for sale. 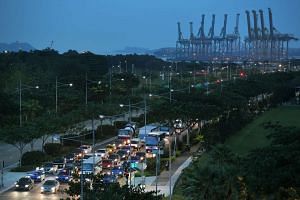 But the authorities' move to improve air quality by regulating vehicular emissions may have enabled buyers to scoop up some popular models at attractive discounts.

For example, sgCarMart shows that Hyundai's popular 1.6l GLS Elantra is now selling for $87,999 compared with $96,999 just six months ago.

Mr David Pang, sales director of the Alpine Group which sells Chevrolet and Opel, also said it is clearing stock of its test-drive Chevrolet models, which do not meet Euro 5 standards.

An ad on the Chevrolet website promotes a "pre-Euro 6 clearance" sale with perks like gifts and movie vouchers.

New Euro 6-compliant versions of Chevrolet cars, such as the Cruze and Captiva, are expected to arrive only early next year, said Mr Pang.

Singapore Vehicle Traders Association president Michael Lim said car buyers are unlikely to rush to showrooms, despite the expectation that prices will rise next month as the new emissions standards have been expected for sometime now.

The real impact on car sales is likely to come next year with the introduction of the stricter vehicular emissions scheme, which will see higher surcharges imposed on carbon dioxide emissions as well as four other pollutants.

The stricter standards of the new scheme is likely to see surcharges imposed even on cars that currently qualify for rebates under the Carbon Emissions-based Vehicle Scheme.

A version of this article appeared in the print edition of The Straits Times on August 15, 2017, with the headline 'Bargains up, car stock down with stiffer rules '. Subscribe
Topics:
More
Whatsapp Linkedin FB Messenger Telegram Reddit WeChat Pinterest Print Purchase Article Copy permalink