SINGAPORE - The authorities are "very close" to uncovering the cause of the disruptions on the Circle Line MRT system, said Transport Minister Khaw Boon Wan.

He told Parliament on Wednesday (Nov 9) he was confident that the investigation findings, along with how the problem will be fixed, will be made known to the public in a few days' time.

"The cause is clear - that there is, or there was signal interference. A particular signal is interfering with our wireless signalling system and causing some of this difficulty," Mr Khaw said, in reply to Non-Constituency MP Dennis Tan.

"But tracking down the cause of the signal requires a lot of efforts and is intellectually very challenging because there are many possibilities and we just got to (go), one-by-one, through elimination, and try to establish what exactly is the cause," he added. 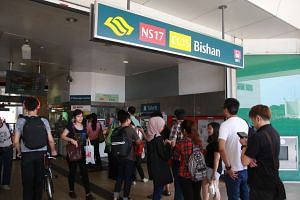 In late August (2016), a mysterious signal interference resulted in slower train speeds and reduced service frequency for a week.

Later in the week, telco operators also temporarily suspended mobile services along the Circle Line, so investigators could narrow down the source of the signal interference.