Yesterday's delay on the Downtown Line did not impact commuters as badly as rail disruptions here have before. Commuters' journeys were extended by, at most, 30 minutes. But it is still significant for a number of reasons.

First, it was the third platform-door-related incident on Singapore's newest line. Door-related flaws are rare on rail networks, but all three on the Downtown Line happened within a span of just seven months, and within 17 months of the line's service commencement in December 2015.

Door supplier Faiveley Transport of France has refused to comment. But when a system is so new, it is unlikely that poor maintenance is to blame when things go awry.

So, could there have been shortcomings in the procurement or commissioning of the doors? A thorough investigation is warranted - especially when yesterday's incident came on the heels of a whole door falling off its frame. It could well have fallen into the path of an oncoming train.

Second, yesterday's disruption shows up once again the lack of a holistic approach to mitigating disruptions. 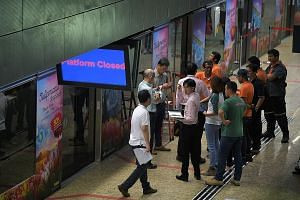 Delays on Downtown Line due to faulty doors

A thorough investigation is warranted - especially when yesterday's incident came on the heels of a whole door falling off its frame. It could well have fallen into the path of an oncoming train.

While it was commendable of SBS Transit to deploy ample staff on the ground to assist affected commuters, there were no announcements or signs on the Circle Line side of the Botanic Gardens interchange station. This was also the case when four lines tripped in April last year. The lines affected were operated by SMRT, but there were no announcements on the lines run by SBS Transit.

Effective dissemination of information by operators - even if the incidents are not on their lines - will help commuters reroute their travel plans, and to reduce the consequential crowd build-up during a breakdown.

Third, why does it take so long for a glitch in the platform doors to be fixed? It took SBS Transit about four hours from the time it closed the southbound side of the platform to address the problem, believed to be a short circuit. And, even after four hours, two doors could not be fixed and had to be cordoned off. Granted, systems and components fail. But surely, a good design allows for timely fixes when failures occur.

When the North-South and East-West lines failed during the evening peak on July 7, 2015, it took the operator the entire night and more to identify the cause.

With the help of external investigators, it was narrowed down to a salt-caked insulator - even though no one was able to replicate the breakdown with that hypothesis. SMRT was fined $5.4 million for the incident, but the amount was reduced to $4 million when the Land Transport Authority acknowledged that the integrated electrical design of the two lines "limited its ability to mitigate the impact of the disruption".

So, a good design should not make for only a robust system, but also for one that is easy to fix when things fail.

Lastly, yesterday's incident shows how the quality of a rail system is only as good as its weakest link. And that weak link can be any of the thousands of components that make up an MRT network.

While much attention has been paid to power rails, running rails, rail sleepers, electrical systems, signalling systems and even the replacement of older trains, no single component can be ignored.

In a network that caters to more than three million trips a day, any minor deficit can add up to a significant degradation in efficiency.

A version of this article appeared in the print edition of The Straits Times on May 04, 2017, with the headline 'A rail system is only as good as its weakest link'. Subscribe
Topics:
More
Whatsapp Linkedin FB Messenger Telegram Reddit WeChat Pinterest Print Purchase Article Copy permalink