Ten were confiscated last Saturday night and the other nine from Monday to Wednesday, the LTA said in a Facebook post.

It said the operations over the weekend were conducted in Admiralty, Bukit Panjang, Choa Chu Kang, Marsiling and Woodlands.

Some of the operations, which saw 80 officers deployed, also involved the police and National Parks Board.

One of the PMDs impounded weighed nearly 50kg - more than twice the 20kg weight limit. 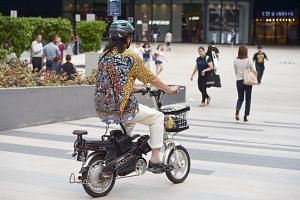 The LTA said 19 offences were detected, including riding on pedestrian-only paths and riding non-compliant PMDs on public paths.

This is not the first time PMD users who flout rules have been caught.

The heaviest PMD that LTA has impounded weighed more than 100kg, according to a Facebook post by the authority on May 22.

Last May, a 64kg e-scooter was seized and in the following month, another one weighing 92kg was confiscated. A modified e-scooter with a long metal structure was also found to be overweight in October the same year.

Over 600 people were caught for illegally riding their PMDs on the road last year.