A total of 42 shared e-scooters found in public spaces were impounded between July and October this year, the Land Transport Authority (LTA) said.

The personal mobility devices (PMDs) - comprising 26 from Neuron Mobility, 15 from Telepod and one from Beam - were found in places like Bencoolen Street and Bayfront Avenue, it said on Tuesday.

This contravened the Parking Places Act, which prohibits such devices from being offered for hire on public land without a licence or an exemption from the Transport Minister.

Under the Act, an unlicensed operator can be fined up to $10,000 and jailed for up to six months, with a further fine of $500 for each day it continues to operate after conviction.

The LTA said exemptions have been granted only for operators such as Telepod to provide services in areas such as the one-north business district, in the light of an existing agreement with landowner JTC.

"These operators are strictly not allowed to provide PMD-sharing services at public places beyond the specified boundaries in one-north," said the authority.

It said Beam did not have such an exemption to operate anywhere on the island, and that its e-scooter was found at Bugis MRT station despite the firm having been informed of regulatory requirements. 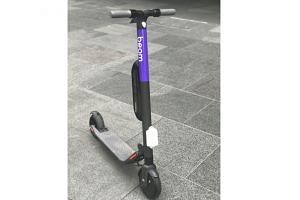 New e-scooter start-up Beam can only apply for licence in Jan 2019, LTA clarifies

Towards safer e-scooter use

The LTA said it was disappointed that the three firms - all of which are based in Singapore - had deployed their PMDs illegally on public land, despite "repeated reminders and warnings".

The authority added that it was investigating Neuron Mobility and Telepod for providing PMD-sharing services at public places without a licence or exemption.

"LTA would like to remind all operators that, when evaluating licence applications, LTA will consider their track record, including their compliance with the law and regulatory requirements," it said.

The licence places a cap on the number of mobility devices a firm is allowed to operate here and requires these firms to take measures to curb indiscriminate parking.

The next licence application exercise will be held in January.

In response to queries, Beam said it had disabled its app to ensure its devices could not be hired, after previously receiving an LTA warning.

"Beam staff continue to ride branded e-scooters as we work towards applying for a licence in January, but these e-scooters are not available for hire to the public," said Beam corporate affairs vice-president Christopher Hilton.

Telepod said it had been deploying its devices "responsibly" in areas such as one-north and the Central Business District in partnership with property developers, and that it was taking action against users who parked indiscriminately.

The firm's chief executive, Ms Gan Jin Ni, said it was committed to operating responsibly and working closely with the LTA.

Neuron Mobility did not respond to queries by press time.

Case executive director Loy York Jiun said that where possible, users should choose services that did not require deposits. He added that they should also consider paying for such services on a per-use basis, instead of signing up for monthly or yearly user passes, to avoid losses should the business fold.

Bike-sharing firm oBike, which folded unexpectedly in June, was reported in August to owe users about $9 million in unrefunded deposits.