SINGAPORE - To clamp down on heavy vehicle drivers who flout traffic rules, the Traffic Police announced on Friday (June 16) that they are running month-long enforcement operations against such errant drivers.

The operations come on the back of two fatal accidents involving heavy vehicles this week, bringing the number to three for June so far.

A combination of covert and overt operations will be conducted daily, with some operations supported by the Land Transport Authority and the National Environment Agency.

This comes as fresh figures show that traffic violations committed by heavy vehicles have risen 13 per cent last year. 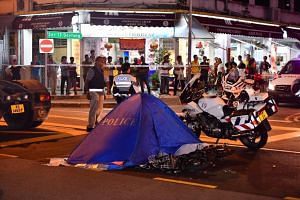 E-bike rider killed in accident with prime mover at Geylang 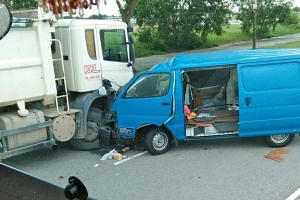 Deaths involving heavy vehicles also went up slightly. So far, there were 19 fatal accidents this year, up from 16 cases in the same period last year.

One such accident involved an electric-bicycle rider, 59, who died on Monday in an accident with a prime mover at the junction of Lorong 13 Geylang and Sims Avenue. A 48-year-old driver has been arrested for causing death by a rash act.

Two days later on Wednesday, a 69-year-old cyclist died after she was hit by a lorry while cycling at the junction of Seletar Road and Jalan Joran.

In 2016, three in 10 fatal accidents involved a heavy vehicle. Heavy vehicles are those with unladen weight of more than 2,500kg. They include prime movers, tipper trucks and buses.

Said deputy commander of Traffic Police Devrajan Bala: "If a heavy vehicle gets involved in an accident with a car, for example, the damage to a car and the injuries to the passengers and driver sometimes can be really very severe, leading even to death. So this is something we want to get across to heavy vehicle drivers."