SINGAPORE - More motorcyclists got into accidents and died in the first six months of this year compared with a year ago, according to latest figures from the police released on Saturday (Aug 18).

This is despite overall traffic accident and fatality numbers falling.

The mid-year traffic statistics by the Singapore Police Force showed that the total number of accidents involving motorcyclists increased by 1.9 per cent to 2,216 in the first half of 2018, from 2,175 in the same period last year.

The number of fatal accidents involving motorcyclists increased by 12.5 per cent to 27 from January to June, compared with 24 a year ago.

There was a slight increase in the number of motorcyclists and pillion riders injured - 2,411 were hurt in the six months of this year, a 0.7 per cent rise from 2,394 a year ago.

Motorcyclists made up 57 per cent of overall traffic accidents and 44 per cent of traffic fatalities from January to June this year.

The rising motorcycle accident figures contrast with overall numbers. In total, there were 3,905 traffic accidents which resulted in fatalities or injuries in the first half of 2018, a slight 0.1 per cent from 3,908 a year ago.

But the number of fatal accidents overall fell by 5.1 per cent to 56, from 59 in the same period last year. This continues a downward trend since 2012.

The number of accidents in which people got hurt remained the same in the first six months of this year and last year, at 3,849 each. 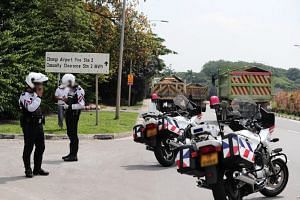 Fatal accidents involving heavy vehicles fell by 50% in first half of 2018: Traffic Police 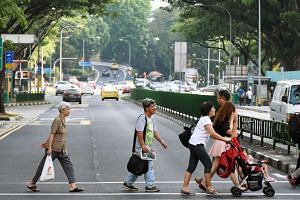 Another area of concern highlighted by the police is traffic accidents involving elderly pedestrians.

The number of elderly pedestrians injured increased slightly by about 0.8 per cent to 119, from 118 in the same period last year.

In the first half of 2018, close to 40 per cent of all accidents involving elderly pedestrians were attributed to jaywalking.

To remind motorcyclists to protect themselves and minimise injuries, a campaign was launched at the Singapore Expo by the police on Saturday to encourage bikers to wear protective riding gear, such as jackets, covered shoes and gloves.

Called the Singapore Ride Safe 2018, the campaign also seeks to instil good riding habits among bikers, such as maintaining a safe braking distance, steering clear of blind spots of larger vehicles, and using designated rain shelters when it rains.

Said Ms Sun Xueling, Senior Parliamentary Secretary for Home Affairs and National Development, at the campaign’s launch: “Every injury and death is one too many. We can do more to keep our motorcyclists safe.”