SINGAPORE - Economic growth for 2019 will likely slow amid global uncertainties, but Singapore will remain squarely focused on its national agenda with healthcare, education and transport as priorities, said Prime Minister Lee Hsien Loong.

"This year, we see dark clouds on the (economic) horizon... We will work hard, but I expect progress to be harder than last year," PM Lee said.

Last year , the economy grew by 3.3 per cent, meeting the Government's expectations.

Nonetheless, the Government will continue working towards ensuring that healthcare, education and transport will be accessible and affordable by all, PM Lee added.

National policies have yielded results for the entire country, he said.

In Teck Ghee, these include a new Ren Ci Nursing Home, which has brought integrated care services closer to the community; more kindergartens, with one opening in Mayflower Primary School; and four additional bus services serving Ang Mo Kio.

PM Lee said that the Government will continue to work hard to achieve stable economic growth here regardless of how the global economy performs.

"We will keep innovating and raising our productivity. Only by doing so can we help retain jobs."

He also thanked the Merdeka Generation who had "travelled with us on the journey from third world to first", referring to Singaporeans born in the 1950s who had accepted hardships and made sacrifices to help shape post-independent Singapore. 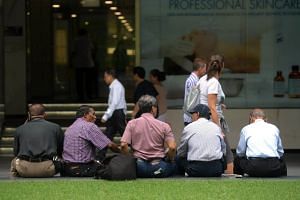 "Your sacrifices and commitment have made the prosperity and stability we enjoy possible," PM Lee said.

He encouraged members of the Merdeka Generation to share their values with their children and grandchildren so that "this spirit of contributing to the country and the courage to break new ground can pass from generation to generation".

Mr Lee said: "The resilience of the Merdeka Generation is precious and our younger generations can learn and imbibe it."

"In the same way, leaders from my generation are also passing the baton to the new team," he said, adding the new team will lead everyone to strive for a brighter future for the next generation.

"I hope the younger generation can get along well with the new team, and keep building Singapore together," he said.

Mr Heng and Health Minister Gan Kim Yong will announce details of a package to help the Merdeka Generation with their medical expenses in Parliament later this month. This was first announced in PM Lee's National Day Rally speech last year.