Richmond Tan does not have a study table in the one-room rental flat that he shares with his father, grandfather and brother.

There were times when he did not even have a roof over his head, after his family was temporarily chased out of the Queenstown flat as a result of spats between his father and the landlord.

Richmond had to sleep in void decks or at Changi Airport.

It was not until 2014 that the then Pioneer Junior College (PJC) student found a more tranquil place to stay, in a friend's house. Even then, he would sometimes get threatening messages from loan sharks who had lent his father money. 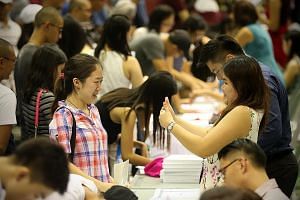 Students ace the A-levels with best performance in 10 years

Despite his circumstances, Richmond, 18, said he does not let it become a convenient excuse for him to perform worse than his peers.

Yesterday, he got his A-level results - he scored As for Maths, Geography and Project Work and Bs for Economics, China Studies in English and General Paper. He was also recognised as PJC's most improved student.

NOT WALLOWING IN SELF-PITY

The struggle people like me face is the lack of confidence in our abilities, but it doesn't mean we cannot make it. It just means we just have to work... harder.

He said what motivated him to do well in his studies was his role model, Han Xin, one of the heroes of the early Han dynasty in China.

He learnt of Han after reading The Art Of War by Sun Tzu, which inspired him to take China Studies for his A levels.

"Han Xin was so poor he had to beg for food. His circumstances were even worse than mine, but he studied hard and became a capable minister," he added.

Richmond has had no permanent home since 2010, as his family cannot afford one.

His father, aged 50, is unemployed and his mother left the family when he was four. His younger brother, 17, used to be in a boys' home, but is now taking a Higher Nitec course.

His grandfather, Mr Tan Khoon Seng, 78, holds a cleaning job and is the sole breadwinner of the family. Richmond helped by working as a waiter during the school holidays and managing his family's bank accounts.

In school, he won awards, such as the Edusave Merit Bursary, every year from 2011 to last year, and was vice-president of the PJC Debate Society.

Richmond plans to try for a business or law course in a local university, and his biggest aim is to buy a flat for his family.

He said: "The struggle people like me face is the lack of confidence in our abilities, but it doesn't mean we cannot make it.

"It just means we just have to work two or three times harder, instead of wallowing in self-pity."

A version of this article appeared in the print edition of The Straits Times on March 05, 2016, with the headline 'Tough at home but teen perseveres and scores'. Subscribe
Topics:
More
Whatsapp Linkedin FB Messenger Telegram Reddit WeChat Pinterest Print Purchase Article Copy permalink