The evaluation criteria for this year's prestigious President's Challenge Social Enterprise Awards (PCSEA) have been updated to include efforts at adopting cutting-edge technology such as artificial intelligence and virtual reality.

"Technology is a great enabler, therefore we want our social enterprises to be sustained for a long time, to be able to make greater social impact, multiply and grow," said President Halimah Yacob at the launch of PCSEA 2019 yesterday at The Arts House.

Last month, the President also said Singapore should leverage technology to better integrate those with special needs, a group of people employed by many social enterprises, including Bliss Group, PCSEA 2013's Social Enterprise (SE) of the Year winner.

Referring to the new criterion, Bliss Group founder Christine Low said it was exploring the use of robots to deliver food.

"We are exploring the use of robots to deliver food from our restaurants. For example, our newly opened Tribe restaurant at The Arts House can use GPS to cross the street to National Gallery and deliver the food. The CCTV attached to the robot can be monitored by the back end," said Ms Low.

Winners will also get support from corporate partners and development opportunities from Singapore Centre for Social Enterprise through networking opportunities, access to funding and advisory services. 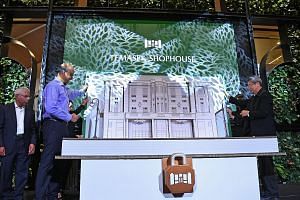 Companies with social impact as their business model

In addition, a new SE Champion of the Year award, which recognises corporations and individuals who have made significant contributions to social enterprises in Singapore, has been introduced.

"The idea is to encourage more companies and individuals to come forward and partner the social enterprises in many different ways," said Madam Halimah. These included activities such as procurement, transferring of knowledge and skills as well as investing in social enterprises.

This is the fifth edition of the PCSEA, a biennial award conferred by the President's Office that honours exceptional social enterprises in Singapore for their contributions made to the local community.

Applications are open until July 12. The awards will be presented on Nov 28 at the Istana.

A version of this article appeared in the print edition of The Straits Times on June 12, 2019, with the headline 'Top social enterprise awards to factor in use of cutting-edge tech'. Subscribe
Topics:
More
Whatsapp Linkedin FB Messenger Telegram Reddit WeChat Pinterest Print Purchase Article Copy permalink