He says report biased, did not reflect his view that 'income disruption here a moral disgrace'

A Facebook post by Ambassador-at-Large Tommy Koh accusing The Straits Times of "biased coverage" of a forum he took part in has generated plenty of discussion online, which turned at one point into a debate between him and former labour chief Lim Boon Heng on whether Singapore should have a minimum wage.

In yesterday's post, which generated over 1,500 shares in 11 hours, Professor Koh also asked why The Straits Times did not carry a picture of a panel featuring Senior Minister of State for Transport and Communications and Information Janil Puthucheary and media professor Cherian George, asking if it was because it was "against our national interest".

He was referring to the newspaper's coverage of the Institute of Policy Studies' (IPS) 30th anniversary conference that took place on Thursday and Friday at Marina Bay Sands.

Prof Koh chaired a dialogue on the first day of the conference and participated in discussions on the second day. Speakers at the panel discussions on Friday included Manpower Minister Josephine Teo and The Straits Times' Opinion editor Chua Mui Hoong.

In his post, Prof Koh wrote: "I would like to ask The Straits Times why it had photos of the speakers and moderators of sessions 1, 2 and 4 but not 3? Is a photo of Janil Puthucheary and Cherian George against our national interest?

"I would also point out to my friends in the ST that their biased reporting on the conference brings discredit to our media.

"For example, the paper reported Minister Josephine Teo's argument that minimum wage could cause unemployment and illegal employment, but not my rebuttal that that narrative is contradicted by the experience of Japan, South Korea, Taiwan and Hong Kong which have adopted a minimum wage. I think the current income disruption of Singapore is a moral disgrace. 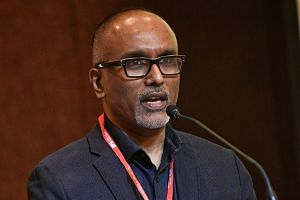 Move away from stance that diversity is a weakness for Singapore: Cherian George

"Today, our income distribution resembles a pear. Think about it."

During the conference, Prof Koh's rejoinder to the minister drew a response from her as well, with both citing arguments to defend their positions. This was summarised in ST's report.

Yesterday's print edition of The Straits Times devoted a full page to the conference, and had a separate report on each of the panel discussions. Photos of panellists, including Prof George, were carried with ST's reports online, but not all the pictures were in the print edition due to limited space on the page.

This was pointed out by Straits Times editor Warren Fernandez in his response to Prof Koh.

Mr Fernandez, who is also editor-in-chief of the English/Malay/ Tamil Media Group of Singapore Press Holdings, said: "Prof Koh is well known to and much respected by many of us in The Straits Times. Which is why his remarks seem all the more unfortunate."

He added: "Our online reports carried photos of the panel speakers. Our report in print on the panel with Prof George led off with his comments, not the minister's, with neither of their photos."

ST, he said, had never made any effort to suppress Prof Koh's views.

"We have also given over many pages to reflect the views of Prof Koh on all manner of subjects, from minimum wage to repeal of Section 377A to his thoughts on foreign policy."

In her response to Prof Koh posted on his Facebook page, ST's Opinion editor, Ms Chua, noted that ST had been the first paper to publish his essay on minimum wage in 2010.

Mr Fernandez noted that Ms Chua was "planning to run a collection of the speeches by several speakers at the IPS forum in Monday's edition of the paper".

"So, to suggest that we deliberately suppressed views which might be at odds with ministerial comments is unfounded and unfair," he said.

Prof George, who replied to Prof Koh's post, said he understood "the limitations on newspaper space" and joked that the lack of his picture with Dr Janil "could have been an aesthetic decision".

He said that he was more struck by how coverage of his panel discussion with Dr Janil was portrayed as "testy" in the media.

"With due respect, Prof Koh, the evidence on minimum wage is at best mixed," he wrote, highlighting that there have been studies that show how minimum wage can increase unemployment.

Instead it was better to focus on productivity growth.

"In other words, let's make a bigger pie together, rather than fight over how to slice a small pie. Even if the share remains unchanged, workers get higher take-home pay."

Prof Koh replied on his thread with a series of five questions, starting with whether Mr Lim agrees with his moral position that every working Singaporean should earn a living wage, and if he did, does Mr Lim agree that many low-wage workers are not paid that.

Prof Koh went on: "Third, does he agree that when the market fails, the state must intervene in order to ensure a just outcome? Fourth, does he agree that the low wages paid to these workers are not due to their low productivity but because we have brought in about a million lowly paid foreign workers to compete with our workers?

"Fifth, does he agree that, to date, the progressive wage model has not raised the wages to a level which enable our low-wage workers to live in dignity?"

Mr Lim responded with his own question, asking Prof Koh if he will accept that there are studies that showed the adverse consequences of minimum wage.

"Years ago, NTUC drew the attention of Government to the 'working poor'. One proposal, which Government did not accept, was to ring-fence certain jobs for Singaporeans only, just as we ring-fence taxi drivers' jobs.

"Instead, Government came up with a wage supplement, first as a trial, then as a permanent feature. The thinking behind this solution was not to distort the labour market, not to impose a wage cost on employers that they did not consider viable.

"It prevents the premature relocation of business out of Singapore to other countries with cheaper labour costs, Government steps in, to ensure lower-income workers get a decent income.

"Yes, Prof, Government does take its responsibility seriously. And yes, we should review periodically the quantum of wage subsidy.

"So, Prof, we have an alternative to the minimum wage, and I think it is superior."