Families, schoolmates go on expedition to Mount Kinabalu in memory of victims

"Ten lives have passed on, but they are still pushing us on," said Mr John Quok, who was among a team that climbed Mount Kinabalu a year after it was hit by an earthquake that killed 10 Singaporeans. His son Elliot survived the quake.

Mr Quok was among parents, schoolmates and relatives of victims who paid tribute to their loved ones at 7.15am yesterday - the time that the disaster struck.

Eighteen people died, including seven Primary 6 pupils from Tanjong Katong Primary School (TKPS) who had been on a school trip.

Yesterday, the Singaporeans gathered at Pendant Hut in Laban Rata, 3,289m above sea level on Mount Kinabalu, where they stayed.

They lit candles and laid painted pebbles on a table before observing a moment of silence for the victims. 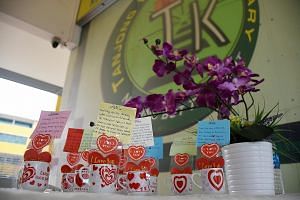 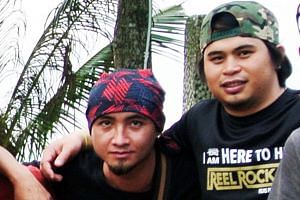 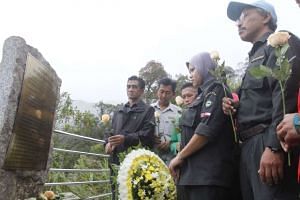 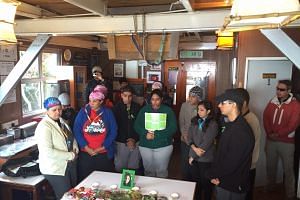 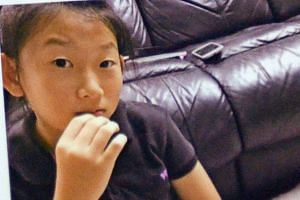 Baby on the way, but dad still misses late daughter 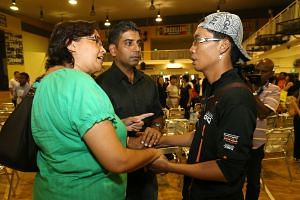 It's been hard but trainers coping well 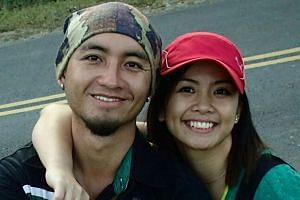 She lost her hero, who saved pupils during quake 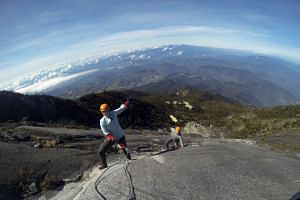 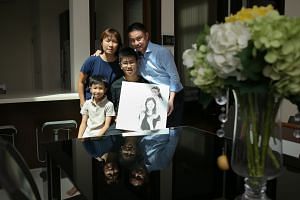 A number from the group were going to make the ascent to Mount Kinabalu's summit around 1.20am today - the time most set out to be able to catch the sunrise. Some parents will also attempt the Via Ferrata trail, where some from the trip last year had lost their lives.

Clasping hands with her family members, Mrs Karen Jhala, 49, closed her eyes and cried. She had lost her daughter Sonia during the disaster.

The precious, wonderful memories are what will get mummy and daddy through these difficult months since you left us to a better place. We hold on tight to the memories, from the time you were our firstborn to the last hugs and kisses the night before you left for the fateful adventure.

Other parents struggled to hold back, but the tears fell anyway, when the group took turns reading messages from friends and family of those who died.

"The precious, wonderful memories are what will get mummy and daddy through these difficult months since you left us to a better place," she read tearfully. "We hold on tight to the memories, from the time you were our firstborn to the last hugs and kisses the night before you left for the fateful adventure."

Sonia's brother Dillen Jhala, 16, told the room: "Whether you're going to climb up to the summit tomorrow, what matters is bringing yourself to go on this expedition - it brings you one giant leap closer to those that have passed."

Mr Quok said during the tribute: "I am humbled by the people who climbed for those who have passed away."

He added that the children, including survivors Elliot and Chantal, completed the climb to Laban Rata in 6½ hours, ahead of the adults. "They will bounce back - they are very resilient. And never underestimate their potential.

" I think as parents, we have to let them grow up, and let them reach their best potential," added the 45-year-old, who works in private equity investments.

The team had split up into smaller groups for the ascent and the last of them arrived at Laban Rata around 12.20am yesterday, completing the final leg in darkness.

"There were several times I just really wanted to give up," said Ms Karishma Jhala, 19, Sonia's sister, who was in the last group to reach Laban Rata. She added that her climb helped her to develop a newfound respect for all the pupils who made the climb last year.

After the tribute, survivor Chantal Phuay, who last year said she wanted to return to Mount Kinabalu and has now achieved her goal, presented a token to Mountain Torq trainer Hajiris Sulomin, 41, who saved her during the incident.

A version of this article appeared in the print edition of The Straits Times on June 06, 2016, with the headline 'They climb mountain in tribute to loved ones'. Subscribe
Topics:
More
Whatsapp Linkedin FB Messenger Telegram Reddit WeChat Pinterest Print Purchase Article Copy permalink