SINGAPORE - For the second year running, The Straits Times has emerged as the No. 1 news outlet in Singapore on Twitter.

Channel NewsAsia was in second place with 459,000 followers, while TODAY newspaper took third spot with 308,000 followers.

STcom was created in May 2009 and has since attracted a steady stream of followers with its accurate, round-the-clock updates of the latest breaking news.

Coverage of founding Prime Minister Lee Kuan Yew's funeral in March and the nation's SG50 celebrations featured among some of STcom's top tweets this year.

Mr Rishi Jaitly, Twitter's vice-president of media for Asia Pacific and the Middle East, said: "We know one of the most popular ways Singaporeans use Twitter every day is to catch up on the morning news by scrolling through their Twitter timeline.

"Thus it's no surprise to us the most popular Twitter accounts are local news and media sites. The Straits Times leads the pack with over 566,000 followers today and maintained its #1 news position on Twitter Singapore in 2015."

The top STcom tweet this year, with 3,300 retweets, was the announcement that all primary and secondary schools will close on Sept 25 due to the worsening haze.

BREAKING: All primary and secondary schools will be closed on Friday, Sept 25, because of worsening haze

Not far behind was the picture of a local comic artist's sketch of the late Mr and Mrs Lee Kuan Yew, with 3,088 retweets. The story of the heroic foreign worker who saved a toddler garnered 2,593 retweets.

There were several influential moments that stood out in a memorable 2015 - foremost was how the nation grieved as one during the week of March 23-29, as Twitter was awash with 1.2 million #RememberingLKY tweets mourning the passing of the late Mr Lee.

The mood turned to jubilation during Singapore's 50th National Day Parade on Aug 9, with 230,00 tweets about #NDP2015 setting a new local record for most number of tweets for a one-day event.

The 2015 General Election, or #GE2015, was a hot topic of discussion among the Twitterati with 360,000 tweets, while the prolonged haze spell that Singapore was forced to endure this year led to 250,000 tweets bemoaning #SGHaze. 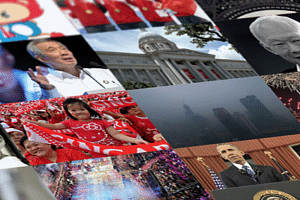 Twitter also released a list of the top 10 accounts in Singapore. Singapore Airlines occupied top spot with 344,000 followers, blogger Xiaxue came in third with 277,000 followers and singer Stefanie Sun was ninth with 172,000 followers.

This year's "golden tweet", fittingly sent out on New Year's Day, was a heartwarming tale of a young woman's handmade gift to her boyfriend on the couple's first anniversary.

The collage of four photos tweeted by @Fatynn has since seen 15,425 retweets and been viewed over a million times, Twitter said.

"This young lady's sweet, heartfelt expression of affection shows how any Singaporean can have a voice on Twitter that resonates with thousands of people," the social media platform added.

Here's a selection of the top tweets from STcom in 2015.

"Not even heavy rain can stop us from sending Mr #LeeKuanYew off on his final journey." http://t.co/sLdIkmJWOG pic.twitter.com/fnJFCYKbw0

"At the end of the day, what have I got? A successful Singapore. What have I given up? My life." - Mr Lee, as quoted by PM Lee Hsien Loong

Mr Lee Kuan Yew, Singapore’s founding father, died today at the Singapore General Hospital at 3.18am. He was 91. http://t.co/OGJD170vj1

"I was nearing 60, and he was nearly 90. But to him I was still his son to be worried over, and to me he was still a father to love"- PM Lee