SINGAPORE - Known for his love for sport, Deputy Prime Minister Tharman Shanmugaratnam dug into the annals of sport to explain the complexity of getting Singapore's two-speed economy to do better all-round.

Like other countries, Singapore has a slow domestic sector where workers earn less.

On the other hand, workers in the bigger and outward-focused sector are paid better.

The challenge is to ensure a large part of the economy does not get stuck in low gear, he said as he turned to the Fosbury Flop to illustrate how a bold and disruptive leap can be a game-changer and set new highs.

High jumper Dick Fosbury pioneered the technique at the 1968 Mexico City Olympics, where he ran in curving loop towards the bar before leaping backwards, head first, with his legs coming over last.

He broke the record by 6cm, and others refined and improved on it.

Over the next 30 years the record went up a further 15cm.

"That's how it must be in the economy, and especially in the industries that have been stuck in low gear. We have to allow and encourage disruptive change," Mr Tharman said. 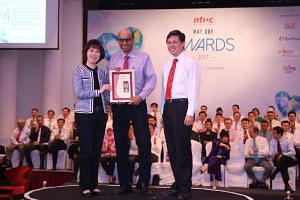 One example he gave was how e-commerce is already transforming retail.

Mr Tharman, who is Coordinating Minister for Economic and Social Policies, made these remarks in an interview with NTUC This Week, a weekly publication by the labour movement. Mr Tharman's office released the transcript on Saturday (May 13) after he was awarded NTUC's Medal of Honour, its highest May Day award.

Mr Tharman noted that it is natural for some companies to be running at a slower pace. They may be content to be on low gear as long as they can just survive.

"But if a large part of the economy is stuck on low gear, then overall wages too will see little growth, and lower wage workers especially will see little improvement," he said.

What is needed, he said, are bold, disruptive changes, introduced by firms that want to transform industries.

"But we also need more of the copying, tweaking and improving by other firms, so that each new innovation isn't just a big leap forward for one firm or one cluster of firms, but spreads throughout the industry."

"We need both things - the bold breakthroughs as well as the constant copying and tweaking that spreads change throughout an economy," he added.

Existing initiatives like SkillsFuture, Industry Transformation Maps, and recommendations by the Committee on the Future Economy will help in this effort, Mr Tharman said.

"But bold innovations will usually put firms and people doing the traditional jobs out of work, so we have to help them get into new and good jobs as quickly as possible," he added.

"If we can achieve this - both the bold, disruptive changes and the constant improvements that are part of an innovative economy - we can keep growing wages for the majority of Singaporeans.

"If we don't, then wages get stuck and the living standards stagnate. So innovation is critical, not just for firms, but for inclusive growth."

Mr Tharman noted that wages for the bottom 20 per cent have grown significantly over the last 10 years, as fast as for the average worker, but it is a challenge to sustain this.

Lower-skilled workers will not be left out as the economy transforms, he pledged.

"A fair number of them are still in informal or irregular work. We must as much as possible get them trained and ensure employers treat them fairly," he said.

Lifelong learning will enable Singaporeans to pick up new skills when an industry is disrupted and jobs lost, but also allow workers to keep on deepening their skills so they stay relevant and get satisfaction on the job, he added.

Mr Tharman also had strong words for companies that are not doing enough to develop their staff. "Companies have to take more responsibility. We still don't have a widespread management culture in Singapore of wanting to invest in developing each and every individual in the team," he said.

Helping workers improve their skills is not just a human resource function but a management responsibility, he added. "We have to have that much more inclusive culture to be widespread amongst management."

Mr Tharman credited the NTUC for "nudging and pushing" employers to invest in workers' training, adding that the labour movement has built trust through the three-way partnership between unions, employers and the government.

"This inclusive culture of learning is really the future. It's about collective bargaining not just over wages, which is of course important, but negotiating over the effort and investment that companies must make in workers' learning. That's what is going to determine our success - whether we can help everyone to keep learning," he said.

"We must develop every Singaporean so that they can create the best future for themselves, and for Singapore."