MyTurf is a fortnightly series that aims to tell untold stories of our neighbourhoods. In this instalment, we look at Normanton Park, which was developed by the Ministry of Defence in 1977 to build esprit de corps among Singapore Armed Forces officers.

Having to lock the front door is something that Ms Hayley Pereira, who recently moved into her Housing Board flat in Depot Road, is still getting used to.

Her former home in Normanton Park, where the 29-year-old marketing executive had lived for nearly her entire life, had felt unusually safe. It was a tight-knit community, she noted, where "everybody knew everybody, and you were welcome at anyone's house - if you knocked on a door, you'd find it unlocked".

Besides, few people are foolish enough to make trouble in a condominium that is home to many military commanders and officers - Ms Pereira's father, for instance, is a retired army major.

The condominium, bordered by the Ayer Rajah Expressway (AYE) and Kent Ridge Park, was developed by the Ministry of Defence to provide affordable housing for Singapore Armed Forces (SAF) commissioned officers and to build camaraderie among them.

It was designed and built by the HDB in 1977, with 488 units of mainly five-room flats spread across five high-rise blocks. Eight three-storey blocks containing executive flats were also built on the plot of more than 632,000 sq ft.

Normanton Park can also boast of having its own exit on the AYE, from which drivers can spot the peaked roofs of its point blocks.

The development has amenities that include a swimming pool, canteen, supermarket, and basketball, tennis and badminton courts.

It was during late-night chats at the playground and study sessions by the pool that love blossomed between Ms Pereira and Mr Ian Vanderput, who were then in their teens. Mr Vanderput, the grandson of Singapore's first Navy commander Colonel James Aeria, later became a captain in the army and Ms Pereira's husband. 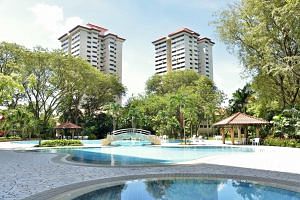 The couple, who have been married for four years, moved in May to their Build-to-Order flat, where they live with their children - two-year-old Scarlett and five-week-old Conor.

Normanton Park, whose name echoes that of Normanton Camp in Pasir Panjang - the headquarters for Malay Regiment during World War II, was privatised in 1993. Former SAF personnel now make up only about a fifth of its residents.

After an unsuccessful collective sale attempt in 2015, residents are gearing up for the en bloc process again, said Mr S. S. Chopra, chairman of the Normanton Park MCST as well as its sales committee.

The previous proceedings garnered support from about 81 per cent of owners, but there were no bids at its reserve price of about $800 million.

"We are a rather large estate... it's 40 years old this year and we've maintained it well, but I think the land can be better utilised," said Mr Chopra, 56, a retired Navy Colonel who has served as committee chairman for 23 years.

The estate's last major upgrade was in the late 1990s, when owners forked out $20,000 each to give the condo a new lease of life.

Continuing the estate's upkeep would be costly, said Mr Chopra, who moved in in 1990.

Like many others, he found the friendly community a good place to start a family.

"I was a junior officer at the time and my commanders and friends from the armed forces were all living here, so I immediately felt at home," he said.

A five-room unit was reported to cost around $39,500 when it was first built, under a government housing scheme in which SAF officers had to remain in service for at least seven years after purchase of the property before selling it.

Although the population of SAF officers at Normanton Park has dwindled over the years, many retired officers still live in the estate, said Mr Chopra.

Some, like LTC (Ret) Seng Oh Kwang, 67, meet at the poolside canteen daily to chat and while away the time. "The profile of residents has changed, but there is still very good kampung spirit and neighbourliness," he said.

Mrs Louise Vanderput, 60, whose family was among the first to move into the estate, said she is for the en bloc sale. "As much as we feel a connection to Normanton, we also accept that it's going to take a lot of money to improve it... you have to put aside your sentimentality - home is where your family is," said the administrative manager, who is Captain Vanderput's mother.

For the second generation of "Normanton Parkers", now in their 20s and 30s, bidding the estate goodbye is a sad prospect.

"All of us have known each other since we were kids, our mothers were friends so we used to play together," said marketing executive Clara Chai, 29.

Playing catch, police and thieves as well as "sledding" down grassy slopes on discarded cardboard boxes were some of the favourite childhood activities for the gang of 10 or so.

"Normanton kids are good swimmers - we used to spend all day in the pool during school holidays," added Ms Chai.

Snacks and drinks could be signed for in a ledger at the supermarket, which the "auntie" still maintains for longtime residents.

Management associate Karan Vir Singh Chopra, 26, said: "Not having any siblings, it was nice because I would come home from school and there would always be something on from 5.30 to 7.30pm, whether it was a swim or basketball."

The friends are still able to rattle off each other's home phone numbers, memorised before mobile phones became widespread.

Even though some have moved out, they keep in contact through a WhatsApp chat group.

And while they still meet up at times, Ms Pereira is a tad wistful about the good old days at Normanton. She said: "It's a little sad that my kids won't get to grow up here like I did. It takes a village to raise a kid, and you get that village here."