Even pop star Rihanna needed a touch-up after making a surprise appearance yesterday at Sephora ION Orchard, where a crowd had gathered to catch a glimpse of her.

The founder of Fenty Beauty used her own Invisimatte Blotting Powder to do the job.

Hot off an appearance and masterclass in Dubai over the weekend, she made her way to the store at about 9.45pm to celebrate the first anniversary of the brand.

Around 200 guests and media were at the store as the 30-year-old Barbadian mingled with fans and posed for selfies. A sizeable crowd of hundreds had gathered outside the store hours before she arrived.

The brand, which launched worldwide in September last year, is best known for introducing an inclusive 40-shade foundation range.

Since then, the line has expanded to include everything from eyeliner and eyeshadow palettes to lipsticks and brushes. 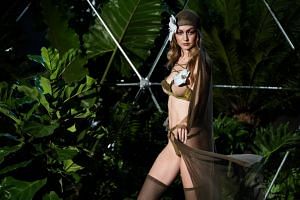 The most recent additions to the range were four shades of her long-wear Stunna Lip Paints liquid lipstick. They were released one by one online via Sephora over the past week. As of yesterday, the liquid lipsticks have also been available in Sephora stores.

On Sunday, Rihanna was in Dubai for the first live Fenty Beauty Artistry & Beauty Talk with 250 fans.

A version of this article appeared in the print edition of The Straits Times on October 02, 2018, with the headline 'The many shades of glamour, Rihanna-style'. Subscribe
Topics:
More
Whatsapp Linkedin FB Messenger Telegram Reddit WeChat Pinterest Print Purchase Article Copy permalink