SINGAPORE - When it comes to climate change, pictures can be even more compelling than words. But gruesome photos may turn readers off, while photos of beautiful animals or places may distract some from the far-reaching impact of the problem.

So how should a balance be struck?

They were answering the question from an ST reader on Saturday (Oct 5) after giving a talk on a climate change special published on June 9 this year. It was based on their visits to various places in Indonesia and the Galapagos Islands in South America.

They showed the audience a picture of a blue-footed booby bird with cacti in the background to illustrate a desert-like climate, and contrasted it with a giant tortoise in the rain. Both pictures were taken on the Galapagos Islands.

"El Nino affects different parts of the world differently," said Ms Tan, 29, referring to a natural climate cycle that can cause change in rainfall patterns.

"The two pictures, while beautiful, illustrate how rain can affect the Galapagos Islands, which is usually dry and desert-like."

For example, the deluge of rainfall could wash away the giant tortoise or inundate its eggs, she said.

The talk, attended by 80 members of the public, took place at the National Museum of Singapore, as part of a photo exhibition organised by ST called Through The Lens.

Another issue raised during the talk was the role of businesses or large corporations in fighting climate change.

While Ms Tan noted that it was important for journalists not to step into the shoes of activists, she said stories on climate change "contribute to a growing environmental awareness that has potential to push corporations to take action", such as doing away with plastic bags or straws.

So the power of individual effort should not be underestimated, she added.

Mr Cheong, 31, said that seeing the "bleakness and scorched earth" in haze-ridden Indonesia has had a personal impact on him.

"When I came back to Singapore - and actually, while I was still on the trip - I became consciously more environmentally-friendly," he said. 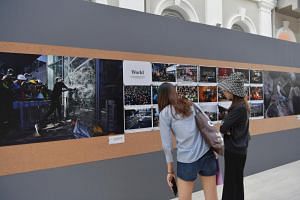 ST's Through The Lens exhibition to showcase best in visual journalism

Celebrate the best in news photography

Auditor James Wong, 50, who does freelance photography, attended the talk with some of his friends. He said: "Climate change is something I'm interested in, and the places (ST) went to, like the Galapagos Islands, are places that not everyone has the chance to go. So it was very eye-opening."

Ms Elaine Lew, 43, who attended the talk with her eight-year-old daughter Emily, said it is important for children to learn about climate change.

"It is a big issue that may seem far-fetched, but every little effort counts, including teaching our kids to be responsible for their actions."

Through The Lens showcases more than 250 provocative and compelling images captured by Singapore and international photojournalists in the past two years.

The display ends on Oct 27. Admission is free.

Schools requesting guided tours for students can inquire at: stprojects@sph.com.sg. The tours will be subject to availability.