Few newspapers can claim to have been continuously published for 200 years, and on Wednesday, The Guardian joined their ranks.

One key strength of the publication that has helped it prevail through ups and downs over the years is that it has been managed by a trust that has enabled and empowered it to hew to the spirit of its original investors, who were not in the business to make a quick buck.

Many media titles around the world are grappling with the challenge of funding and sustaining quality journalism.

On Thursday, Singapore Press Holdings (SPH), which publishes The Straits Times, announced plans to restructure its media business, SPH Media, which includes ST, and eventually park it under a new company limited by guarantee (CLG).

Noting that the media business faces financial challenges over the next few years, SPH chairman Lee Boon Yang said one key driver has been digital disruption.

Worldwide, traditional media organisations have seen readership and revenues drop as anyone can access information any time, anywhere on the Internet.

SPH's media business has seen operating revenue halve over the past five years, driven largely by the drop in print advertising and print subscription revenues. Last year, its media business posted its first-ever loss of $11.4 million for the financial year ending Aug 31 - one that would have been sharper without the Government's wage subsidies for firms to tide through Covid-19.

At the same time, SPH's growing digital presence has seen the average monthly unique audience of all titles nearly double to 28 million over the past two years, the largest in its history.

For ST, while print revenues are down, digital subscriptions and readership are growing, and the challenge is how it can monetise readership and grow revenue going forward.

Given these trends, Dr Lee noted at a press conference on Thursday: "Being part of a publicly listed company is no longer a tenable model for SPH Media. A new funding model is needed for SPH Media to remain financially sound and functionally robust in the long run."

How have others grappled with the challenge of ensuring news organisations stay sustainable? What ought to be done to ensure outlets like ST have a future - and remain viable well past their 200th year? 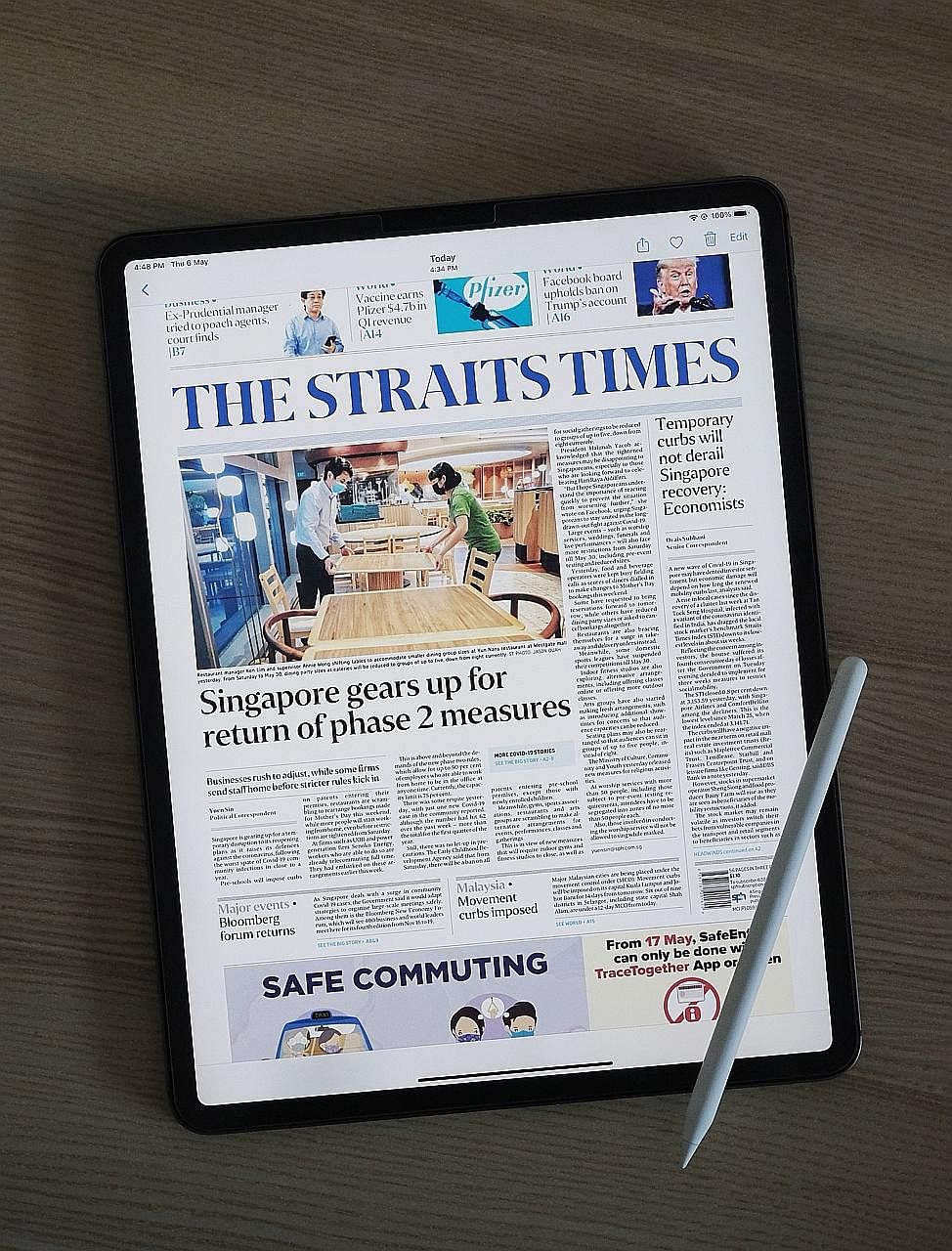 In an essay in the latest issue of The New York Review of Books, titled Two Centuries Of 'The Guardian', former Guardian editor Alan Rusbridger noted that the paper's founder John Edward Taylor had two aims when he started the product in 1821: to bear reliable witness in a world of information confusion, and to shape views.

To mark the paper's centenary in 1921, former editor C. P. Scott wrote an essay in which he noted that the editorial imperative trumped any commercial considerations.

"A newspaper has two sides to it. It is a business, like any other, and has to pay in the material sense in order to live," he wrote. "But it is much more than a business; it is an institution; it reflects and it influences the life of a whole community… It has, therefore, a moral as well as a material existence."

In 1936, his son J. R. Scott formally established the Scott Trust as a non-profit foundation to safeguard the paper's independence. The move also prevented it from being snapped up by a press baron like Lord Northcliffe, who launched the Daily Mail, and Lord Beaverbrook of the Daily Express.

SPH's growing digital presence has seen the average monthly unique audience of all titles nearly double to 28 million over the past two years, the largest in its history. For The Straits Times, while print revenues are down, digital subscriptions and readership are growing, and the challenge is how it can monetise readership and grow revenue going forward.

The model of the trust is one many news organisations have adopted, with adjustments, to ensure they are able to remain aligned with their founding mandates.

In Germany, the Bertelsmann Foundation ensures the viability of several media outlets, and in France, Ouest-France has been owned by a non-profit organisation since the early 1990s.

In the United States, investigative journalism website ProPublica was created in 2008 with a donation of several million dollars.

With this ambitious model, it is possible to provide media actors with secure capital while imposing statutory constraints on the power of outside stockholders. It provides a new place for societies of readers and employees as well as a legal and fiscal framework suitable for crowdfunding, or participatory financing.

FRENCH ECONOMICS PROFESSOR JULIA CAGE, in her book Saving The Media: Capitalism, Crowdfunding and Democracy. She believes journalism outlets should be granted non-profit media organisation status - an intermediate status between a foundation and a corporation.

Their funding structures have enabled these organisations to weather the digital revolution better than others.

But a number of large titles have also seized opportunities posed by digital disruption to grow.

For them, the media business remains profitable, and growing, but not without challenges.

A 2019 report by the Boston Consulting Group (BCG) on US journalism noted that for-profit entities like The New York Times and The Wall Street Journal have been able to effectively build digital subscriptions and marketing businesses.

But it is also a model confronted with some harsh realities.

Most publicly traded US newspaper stocks languish in the bottom quartile of five-year performance, said the BCG report. Consumers have been much less willing to pay for digital journalism than for video or audio content. And 20 per cent of local daily and weekly newspapers in the US have shut since 2014.

The report noted that while there are signs consumers will pay for high-quality online journalism, "often, however, journalism has benefited from various forms of subsidy, support and benevolence".

This includes white knights - a new generation of billionaires who have stepped forward to buy media titles, but who many newspaper editors remain wary of.

Is there then a new way forward?

French economics professor Julia Cage noted that if the media of the future is to depend on wealthy investors for their financing, many dangers lie ahead.

She cited how the settlement of the estate of Italian publisher Carlo Caracciolo, in part, plunged the French daily newspaper Liberation, which he had a substantial stake in, into a crisis, and highlights why it is preferable for media companies to be organised as foundations.

"In a foundation, heirs cannot dispose freely of capital they inherit. The investment is irrevocable, hence permanent," she said. However, foundations can become vulnerable to excessive influence by a small number of people, and vulnerable to economic downturns.

In her book Saving The Media: Capitalism, Crowdfunding And Democracy, Professor Cage notes that at its core, news, like education, is a public good. And like major universities that combine commercial and non-profit activities, she believes journalism outlets should be granted non-profit media organisation status - an intermediate status between a foundation and a corporation.

"With this ambitious model, it is possible to provide media actors with secure capital while imposing statutory constraints on the power of outside stockholders," she said.

"It provides a new place for societies of readers and employees as well as a legal and fiscal framework suitable for crowdfunding, or participatory financing."

Prof Cage's proposed model has its merits, and is worth studying as SPH Media seeks to secure and grow funding in the years ahead.

Her model, she noted, can guarantee the quality of the media by ensuring a stable provision of capital through long-term investments.

"By reducing the decision-making power of the largest stockholders and placing significant countervailing power in the hands of readers, listeners and viewers as well as journalists, this model is aimed at democratic reappropriation of the media by those who produce and consume the news, rather than by those who seek to shape public opinion or use their money to influence our votes and our decisions."

There is also the option of direct government subsidies, or funding, of the media. Numerous examples abound of governments funding media, through both direct and indirect subsidies.

In France, they date back to 1920, when newspapers received a tax break. In most European countries, newspapers benefit from a reduced value-added tax.

Sweden has offered its newspapers operating and distribution subsidies, while Norway subsidises smaller and dissenting newspapers to maintain pluralism in its press.

And in many countries, including Singapore, government advertising and legal notices are a considerable revenue source.

Some commentators have raised concerns about government funding of the media being a means to exert control or influence over the news that is put out.

It is a view that discredits editors and journalists everywhere, many of whom guard and value their editorial integrity and independence.

And as Prof Cage notes, public funding plays a substantial role in financing universities and think-tanks in most countries, and does not compromise the independence of these institutions, or of the research and teaching they do.

Information, like education, is a public good that should be accessible to everyone.

And because access to information should be a given, governments - as well as companies, foundations and philanthropists - ought to consider how they can better enable that access, including by contributing to functions like training and capability building of media professionals.

In an essay last year, Can Journalism Be Saved, Columbia Journalism School professor Nicholas Lemann noted that because public service journalism has never been able to sustain itself in the marketplace, it needs some outside support system or it will disappear. "No source of funding for journalism comes without the potential for editorial distortion," he acknowledged.

"In the days of daily newspaper street circulation wars in the early 20th century, the push was towards sensational crime coverage. During the advertiser-supported golden age… it was towards consumption-promoting lifestyle journalism."

Today, journalism supported by patrons and foundations tends to "focus on issues that are important to wealthy philanthropists - more coverage of climate change, less of labour organising - and to expect direct political and policy results that journalism can't often achieve".

Professor Lemann notes that government funding is something almost all American journalists react to with a visceral recoil. The same can be said of societies without a tradition of state-funded media.

But, as he noted, "great portions of the independent truth-seeking activity in the US are funded by the government, reasonably successfully, despite enormous built-in potential for political interference", from Federal Reserve economists to climate change researchers.

In Singapore's case, the Ministry of Communications and Information has said the Government is prepared to provide funding support to the CLG to help SPH Media accelerate its digital transformation and build capabilities for the future.

In a note to staff on Thursday, SPH chief executive officer Ng Yat Chung wrote: "As a not-for-profit entity where any profits can be retained and reinvested in the business, SPH Media will have a more sustainable financial future.

"It will be free to tap a range of alternative funding sources, from the public, private or philanthropic sectors. This will better enable it to focus on quality journalism and invest in talent and new technology."

The outlook for the media industry remains uncertain. But new models of funding and investments in talent and technology will help give media outlets a firmer footing to not just survive, but thrive.

A version of this article appeared in the print edition of The Straits Times on May 08, 2021, with the headline 'The challenge of funding and sustaining quality journalism'. Subscribe
Topics:
More
Whatsapp Linkedin FB Messenger Telegram Reddit WeChat Pinterest Print Purchase Article Copy permalink