Whether he was developing and launching new policies, chairing committees tasked to improve productivity, or advising unions, Mr Tharman has always prioritised the interests of workers, the NTUC said.

In the award citation, the NTUC credited Mr Tharman for his wide and varied contributions to the labour movement, "from deepening tripartism to driving national initiatives to better the lives of workers".

In particular, the NTUC said, Mr Tharman was behind several national schemes to support workers.

It pinpointed three: the Jobs Credit Scheme which subsidised the wages of workers during the global financial crisis to encourage employers to preserve jobs; the progressive wage model which sets the minimum wages of low-wage workers in the cleaning, security and landscape sectors; and the Special Employment Credit scheme which subsidises the salaries of older workers to encourage employers to hire them. 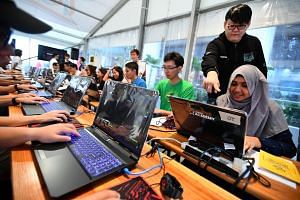 The story of the 'Fosbury Flop' shows how Singapore can spur growth: Tharman

As chairman of several committees charting Singapore's economic growth and productivity drives - the Economic Strategies Committee in 2009, SkillsFuture Council, National Productivity Council and subsequently the tripartite Council for Skills, Innovation and Productivity - Mr Tharman had also always made sure that workers would benefit.

The NTUC singled out Mr Tharman's role in overseeing the development of industry-transformation plans and tripartite committees of unionists, employers and government officials to draw up career plans for workers in more than 20 sectors.

It added that he had pushed for Singapore to achieve quality growth through tightening the inflow of foreign workers and raising productivity, and had opened up lifelong learning opportunities for workers.

"In all these initiatives, DPM Tharman has taken a keen interest in ensuring that workers benefit from economic transformation," said the NTUC.

The citation also spelt out Mr Tharman's direct involvement with the labour movement.

Under his watch as chairman, the Ong Teng Cheong Labour Leadership Institute has doubled its training places since 2002.

The Chemical Industries Employees' Union and Singapore Industrial and Services Employees' Union (SISEU) had also benefited from Mr Tharman's advice. As adviser to both unions in the past he had helped to grow the membership of the unions significantly, the NTUC said.

SISEU is now the second-largest union in Singapore with more than 82,000 members.

Mr Tharman also had a friendly manner, that endeared him to unionists. "Among unionists, DPM Tharman has always been known to be unassuming and approachable. During dialogue sessions with our management partners, he has made a genuine effort to understand and address their business concerns," the NTUC said.

It added: "Over the years, he has fortified labour-management relations, and strengthened our collective will to build a fair and inclusive workplace and society."

The Medal of Honour was last given out by the NTUC in 2014 to Deputy Prime Minister Teo Chee Hean and Health Minister Gan Kim Yong.