Strolling into the Istana, one is immediately struck by the splendour of its grounds.

But behind the more than 40ha of sprawling greenery is a team of dedicated people who work hard to maintain it daily. Some of them have done so for decades.

From cutting the grass with a simple sickle when he was 18 to using a grass-cutting machine at 65, Mr Hamid Sudi has tended the grounds of the presidential residence for nearly five decades.

The assistant officer of horticulture starts work early. By 7am, he would already be busy with various tasks, like trimming the grass, manuring and attending to pest control at the Istana's front lawn or golf course.

With his 47 years of experience, he also takes new staff under his wing. After lunch, he checks on the machines used for cutting grass and makes repairs if necessary.

Mr Hamid was the one who built an enclosure for the swans at the Swan Pond - located near the main gate and the largest of five ponds there - using natural materials from the grounds.

Tending to the grounds of the Istana was his first and has been his only job since he joined under then President Benjamin Sheares in the 1970s. "I feel happy at work. The Istana grounds have become even more beautiful over time," Mr Hamid told The Straits Times in Malay.

This is a sentiment shared by his colleague, Ms Poh Joo Nam, an assistant curator with the National Parks Board who joined the Istana team 22 years ago.

Nothing escapes her eye - or her iPad. Aided by the tablet device, Ms Poh, 63, conducts inspections on the overall health of about 10,800 trees on the grounds over the course of a year.

The grand procession of rain trees shading Edinburgh Road, which leads into the Istana grounds from the main entrance.

Some of the most satisfying parts of her job are also the most challenging. Getting ready for the Istana's open houses, for example, can take weeks of work.

There are typically five open houses a year, held in conjunction with public holidays. But this year, there will be an additional open house on Oct 6 to commemorate the Istana's 150th anniversary.

On such days, she and her team would start to prepare the grounds from as early as 6am. The tasks include everything from making sure the ponds on the grounds are fenced off properly, to ensuring that the volunteers leading walks are ready, to preparing plant specimens for public viewing. 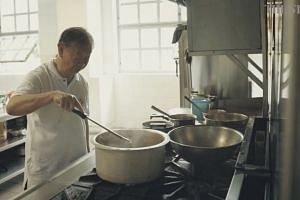 But all the effort is worth it, said Ms Poh. "When those who visit and see the grounds are happy, you are happy as well," she said.

Roving exhibition takes visitors through sights, smells and sounds of the Istana

The grounds have changed under the influence of each president. Under President Halimah Yacob, the grounds have been opened up further to the public, especially for disadvantaged groups.

For example, President Halimah personally greeted elderly residents from Thong Teck Home for Senior Citizens in May when they visited the Istana - some for the first time. The residents also visited the Spice Garden and the main Istana building.

For someone who has witnessed the grounds change under four presidents, Ms Poh retains the enthusiasm of a person new to the job.

She shared that she was supposed to retire last year - but decided to stay on for three more.

"I love this place. My team and I put in a lot of effort to improve the grounds. I think if I retire... I will miss the people and the grounds."

A version of this article appeared in the print edition of The Straits Times on July 08, 2019, with the headline 'Tending to Istana's sprawling greenery no walk in the park'. Subscribe
Topics:
More
Whatsapp Linkedin FB Messenger Telegram Reddit WeChat Pinterest Print Purchase Article Copy permalink