Goh Chang Hann, 17, says being adopted is the best thing that ever happened to him. He has "nothing but gratitude" for his adoptive parents. Without them, he says he might still be languishing in an Indonesian orphanage or he could have ended up on the streets.

Chang Hann, an Indonesian who was adopted by a Singaporean family, added: "I feel so blessed to have such a loving family. My family has always been there for me. They have seen me at my best and at my worst, and they love me both ways."

His adoption story is featured in Our Very Own 2, a second book on adoption published by Touch Adoption Services. The charity is putting out the new book to raise awareness about adoption, as there are few local books on the topic. 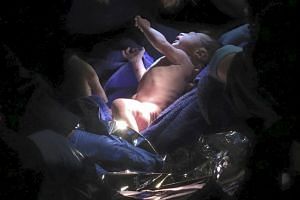 Touch senior manager Teo Seok Bee said: "We want to promote adoption as another way to set up a family. We want to break this mindset that adoption is a hush-hush thing by sharing real-life stories."

The book, which will be launched on Jan 16, includes stories of adoptive families and adopted children.

If I ever meet my biological parents one day, I will tell them I forgive them... There's no point holding a grudge or being angry with them as I can't change what has happened.

GOH CHANG HANN, 17, who was adopted as a baby in Indonesia

Chang Hann said his parents told him he was adopted when he was five or six years old.

"My parents have been very honest with me, so I never had any issues with being adopted," the student said.

As he has darker skin than his Chinese adoptive parents, he said he is always asked why. His reply: He is adopted.

The next most frequently asked question is: "Do you want to find your biological parents?"

Said Chang Hann: " I would say I don't know and that I'm not in a hurry to find them."

Like many other adopted children, he has wondered why he was put up for adoption.

"Was I not good enough so they gave me up? This has motivated me to do my best for my adoptive parents so they don't regret adopting me," he said. "But perhaps, it's better that I don't know why they gave me up. If I don't know the reason, I wouldn't judge them or be angry or sad."

His mother, 43-year-old home- maker Sha-Rin Low, was not planning to adopt when she volunteered at an orphanage in Makassar, the provincial capital of South Sulawesi, Indonesia.

Her husband, Mr Goh Soo Sing, 44, was posted to Makassar for work at the time. He is now a director with property management firm Indonesia Prima Properties.

Madam Low grew fond of Chang Hann, who was then 18 months old, and they decided to adopt him.

Two years later, the couple adopted another Indonesian girl, Di Yann, who is now 14, thinking they could not conceive. But to Madam Low's surprise, she conceived naturally and her youngest child, Chang Jernn, is now 12.

The couple took Chang Hann to visit his birth father regularly "out of compassion" before the family left Makassar over 10 years ago, but they have since lost touch with the man. Madam Low declined to say more about Chang Hann's biological parents.

The couple have shown their children photographs of their biological parents and asked if they want to look for them. But both children said they were unsure.

She said: "I will be happy and excited for them if they want to look for their biological parents. I think this would give them some closure and perhaps answer questions they may have always had.

"I don't think they will leave us (if they meet their biological parents). They regard us as their real parents."

Chang Hann says his parents are the ones who raised him and showered him with love.

"But if I ever meet my biological parents one day, I will tell them I forgive them. I will tell them they don't have to explain (why they gave me up for adoption)," he said. "There's no point holding a grudge or being angry with them as I can't change what has happened."

A version of this article appeared in the print edition of The Straits Times on December 25, 2015, with the headline 'Teen grateful for his adoption'. Subscribe
Topics:
More
Whatsapp Linkedin FB Messenger Telegram Reddit WeChat Pinterest Print Purchase Article Copy permalink