SINGAPORE - While most of today's youth are still in school, their counterparts 200 years ago - including early settlers like Tan Tock Seng - were venturing at a young age into the largely uncharted territory of Singapore and laying its modern foundations.

For instance, Tan, who came to Singapore in 1819 at age 21, started out as a vegetable seller and later became a successful businessman.

In 1844, he donated a princely sum of $5,000 to the construction of the Chinese Pauper Hospital in Pearl's Hill.

This youthful cast of characters, one of the seeds that created the plural and diverse Singapore of today, is among the many points in history that will feature in the 2019 commemoration activities of Singapore's bicentennial, said Mr Gene Tan of the Prime Minister's Office (PMO).

Mr Tan is the executive director of the Singapore Bicentennial Office in the PMO.

The commemoration will be marked by a year-long calendar of events in 2019, culminating in an exhibition that highlights milestones and is likely to harness technology to enhance the narrative.

Different communities will also be tapped to develop their own heritage projects and chronicle their contributions to Singapore during the 200 years.

Speaking to The Straits Times, Mr Tan said the exhibition is not about paying tribute to colonialism.

"We're looking at a cast of characters who made their mark. Among them were Stamford Raffles, William Farquhar and John Crawfurd, who were all part of the story. But there were others too," he said.

Since 1819, a more complex society has evolved.

Many of these pioneers' descendants are still around.

They include Mr Mohamed Patail, 67, whose great-great-grandfather was property and trading tycoon Mohamed Salleh Eusoof Angullia, a Gujarati Sunni Muslim.

The Indian merchant arrived in Singapore in the mid-1800s and went on to own tracts of real estate. The Masjid Angullia in Serangoon Road stands on land he bought.

Mr Patail, chairman of the Sultan Mosque's board of trustees, said he feels proud of his family history and lineage. 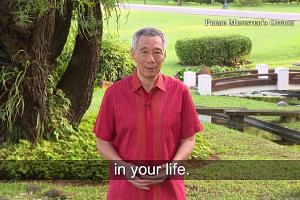 "It is important to further heighten awareness of the roles these earlier pioneers played because they helped shape modern Singapore to what it is today."

Mr Tan said the project is about reflecting on the journey "from Singapore to Singaporean".

He said the showcase, therefore, will look at the island's 700-year history beyond its function as a port, and how it became a nation and a people with a unique Singaporean DNA over the centuries.

Mr Tan described the commemoration as a prequel to the SG50 celebrations. "It serves to examine and situate the 2015 celebrations in a broader context in time and space."

The PMO declined to disclose its budget for the bicentennial activities but said it will be on a smaller scale than SG50. It will also ride on other events like the National Day Parade in 2019.

He said people would be curious to know why Raffles was interested in Singapore and what the island was like before he arrived.

Mr Tan - the creative mind behind the Future Of Us exhibition at Gardens by the Bay, which ran from late 2015 to early 2016 - pored over books on local and global history to develop the narrative for the showcase.

The storyline discusses the 500-year period between the 1300s and 1819, which saw the rise of an age of commerce in the region and beyond.

Other milestones include the establishment of the Suez Canal in 1869, and the advent of the telegraph, steamships and electricity in the 18th and 19th centuries.

Mr Tan, a history buff who enjoys reading the histories of cities such as Paris and Venice, said of the Singapore Bicentennial project: "It has been eye-opening. Our history has an epic nature to it and Singaporeans need to be told these stories."

Singapore Heritage Society's vice-president, Dr Chua Ai Lin, said the exhibition could be useful for people unfamiliar with Singapore's past. "We need to do this because our history did not start in 1965. It goes back 700 years."

Heritage expert and law professor Kevin Tan added: "Was 1819 important to the creation of modern Singapore?

"This is something we might want to think about collectively as a country. It is good to bring this into public discussion."

The 50th anniversary of the founding of Singapore by Sir Stamford Raffles was celebrated with the completion of Cavenagh Bridge.
1919
The island’s centennial took place on Feb 6 and the main event was the unveiling of a memorial tablet, which had been placed at the base of Raffles’ statue  in front of Victoria Memorial Hall.
It followed a series of addresses and speeches on the centennial by dignitaries from British Malaya.
A book on 100 years of history, written by Walter Makepeace, Gilbert Brooke and Roland Braddell, was also published.
1969

Singapore, which gained independence in 1965, celebrated the 150th anniversary of its founding by inviting foreign guests to the National Day Parade on Aug 9.

The  special guests included Queen Elizabeth’s cousin, Princess Alexandra; Malaysian Deputy Prime Minister Abdul Razak; and representatives from New Zealand, Britain and Australia.
The University of Singapore, predecessor of the National University of Singapore, contributed a book on all aspects of urban and natural development.
Various celebrations also took place across the island.