SINGAPORE - Deputy Prime Minister Heng Swee Keat said he has been a "big beneficiary" of Tan Tock Seng Hospital (TTSH), and also noted the important role the hospital has played in Singapore's history.

Following a stroke during a Cabinet meeting in 2016, Mr Heng - also the Minister for Finance - received surgery at TTSH and was hospitalised there for six weeks.

Set up in 1995, the fund has more than 100 patient-centred programmes. It supports more than 2,500 needy families and disburses more than $2 million each year.

On Sunday, Mr Heng met some of the doctors and nurses who took care of him in 2016, and thanked them.

Noting there were three different care teams that looked after him across the three daily hospital shifts, he said: "So I want to take this opportunity to thank each and every one of you for taking such good care of me, my wife and my family during this period." 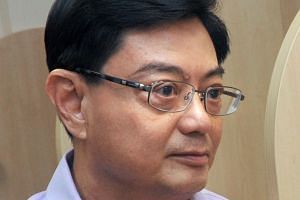 Citing a recent report which found Singaporeans had the longest life expectancy in the world at 84.8 years, Mr Heng said people here need to be better prepared to stay healthy in their old age.

He noted that Health Minister Gan Kim Yong and his team, together with healthcare professionals here, are working on helping senior citizens to continue to stay active and healthy.

"We are shifting from just healthcare to health. Let's do all of that together," said Mr Heng.