With posts of anything ranging from photos of the cinnamon buns his daughter baked to thoughts on why some working adults still need financial aid, Minister for Social and Family Development Tan Chuan-Jin has one of the most prolific online presences among Singapore's Cabinet ministers.

He can also laugh at himself - in a post in April, he called himself a "suaku" ("country bumpkin" in Hokkien) for having not tasted Chinese preserved olive vegetables before.

But his candid nature has put him in a spot at times. For instance, in 2015, critics branded him insensitive for saying that some elderly people collect cardboard, not to earn a living, but to get extra income or as "a form of exercise and activity, rather than being cooped up at home".

In an interview with The Straits Times last week, Mr Tan said: "Actually - and not just on that particular issue - many things I have said were taken out of context, twisted... Unfortunately, I don't think this is going to change.

"It's not just happening here, it's happening everywhere else. People sometimes don't always read the articles themselves - they just see the headlines and get angry."

Despite this, he does not intend to simply keep quiet either.

"Does it mean that we (should) become afraid to say anything, because the best thing is not to say anything, then we won't get caught up in any controversy whatsoever? But these are issues which I feel very strongly about and I do think that we need to reach out." 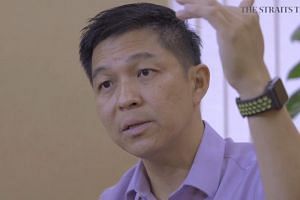 Interview with Tan Chuan-Jin: Early action to break cycle of poverty in Singapore

Online pleas for aid: Govt may step in with details, says Tan Chuan-Jin

Regarding his comments on cardboard collectors, he said he was encouraged then to see youth volunteers befriending the collectors to understand their challenges.

He said: "The key message really was: Please talk to them, find out, let us know so that we can follow up.

"The point I made was that there are various reasons (why people collect cardboard). Some of them need help, and some are people whom we are already helping but prefer to continue for various reasons."

When asked if he personally monitors certain websites or Facebook pages, he said he does not.

"I just read what pops up in my Facebook news feed, or when people send me links and say, 'Did you see this? They attributed it to you'. Then you read it and get horrified and just sigh. What to do?" he said.

There will be some people who think he is "completely out of touch", he noted, despite his efforts to understand challenges and craft policies to address these.

But he remains undeterred.

"If all people look at is just one reference point and judge you on that, well, that's life in a public space. It can't be helped, but that should not put us off from wanting to understand situations better and being involved, which is fundamentally important, because you can't create policies in isolation."