SINGAPORE - The Chinese New Year weekend seems to be a perfect time to walk around Chinatown, if you are taking a break from visiting relatives and friends this year.

Keeping this in mind, the Urban Redevelopment Authority (URA) on Friday (Jan 27) re-shared a comprehensive walking map of the historic district on its Twitter page.

The map was first released by URA and the Chinatown Business Association in 2013. It charts the streets in four distinct sub-districts: Telok Ayer, Kreta Ayer, Bukit Pasoh and Tanjong Pagar.

Visiting Chinatown this Lunar New Year? Check out one of our old favourites - the Chinatown walking map https://t.co/IXMInkz0ci pic.twitter.com/TjVeHyd8oM

The walking map also includes short write-ups on the origin of Chinatown, as well as information on landmarks in each of the four sub-districts.

Architecture lovers will appreciate the guide to the six general styles of Chinatown's shophouses. 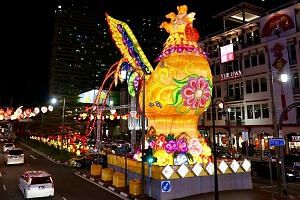 The roots of Chinatown, which was given conservation status in 1989, can be traced back to as early as the 1820s, when immigrants from southern China and southern India settled there.

Businesses in the area have over the years attempted to reinvent themselves to draw the younger crowd.

This year, a new flea market on Jan 14 and 15 featuring locally made products and second-hand items was launched at Chinatown's Chinese New Year festival.

A free exhibition on chicken trivia, for the Year of the Rooster, will be held at Chinatown Heritage Centre at Pagoda Street from Jan 29 to Feb 28.

To get right into the heart of the action, join the free Chinese New Year countdown party on Jan 27, from 9.30pm to 12.30am, at New Bridge Road and Eu Tong Sen Street and enjoy the fireworks display at midnight.