Nineteen-year-old Megan Loy suffered serious burns to around 80 per cent of her body when a blaze broke out at the Colour Play Asia festival in Taiwan in June last year.

The Singaporean, who was on a celebratory graduation trip with five friends, was among almost 500 people who were injured when a fireball ripped through the crowd at New Taipei's Formosa Fun Coast water theme park. Fifteen people were killed.

The fire started when coloured corn starch sprayed on partygoers ignited under the heat of stage lights.

Yesterday, the organiser of the party, Lu Chung-chi, was found guilty of negligence and jailed for four years and 10 months. 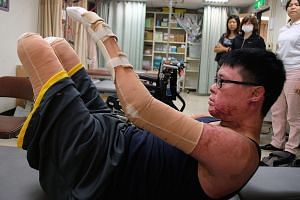 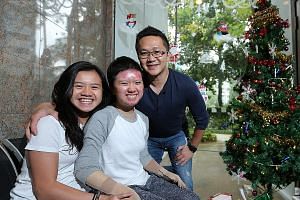 He was the only person to be indicted over the disaster out of the nine who were investigated. The eight others, who included the chairman and president of the water park, were cleared of charges.

Many relatives of those killed and injured believe Lu should have received a longer jail term.

Taiwan's prosecutors have ordered a district court to reopen the investigation into the other eight after campaigners demanded justice.

However, Megan's businessman father said her family of four have put the incident behind them.

Megan's condition is improving. After nine skin grafts, she is free of burn wounds but there are still some scars and tender spots on her skin.

The teenager, who enjoys playing badminton and basketball, is slowly regaining her mobility after regular physiotherapy sessions at the Singapore General Hospital. She is now able to go running though she still has to wear a pressure garment to protect her skin.

She received her International Baccalaureate exam results last year, scoring 42 out of 45 points, and has applied for a place at the Yong Loo Lin School of Medicine at the National University of Singapore. She hopes to specialise in burns and plastic surgery in the future.

Said Mr Loy: "We'd rather look forward than look back."