He argues he should get 1/4 of sales proceeds, even though his share was transferred in 1985

The surviving sons of the founder of Swee Kee, once Singapore's most famous chicken rice shop, are in a court fight over the family home in Katong, which was sold 1½ years ago.

The third son, Mr Moh Tai Siang, 59, claims one-quarter of the proceeds should go to him, even though he had, in 1985, transferred his share of the house to second son Tai Tong, also known as Freddy, and youngest son Tai Suan, known as Royston.

It is Tai Siang's contention that Freddy, 61, and Royston, 58, have been holding his stake in trust for him all these years. 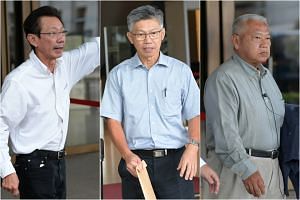 Family feuds over fortunes and business empires: 7 cases that have grabbed headlines

In 1957, Mr Moh bought the house as a home for himself and his wife, their four sons and their families. He died in 1977, but his widow remained at the house until her death in 2015, while the sons, except for Freddy, moved out.

In his lawsuit, Tai Siang said he and his brothers had been given their shares of the house in the 1970s, when their father, who was potentially liable as the guarantor of a $1.25 million bank loan, decided to "re-organise" his assets.

When Tai Siang faced financial difficulties in 1985, he claimed his mother and eldest brother, Tai Sing, asked him to transfer his share to Freddy and Royston to avoid putting the family home at risk. Tai Siang alleged that his mother had told him he would get his share back when he was "old" or the house was sold. The transfer was handled by a law firm. A legal document stated that $200,000 was paid for Tai Siang's share but he denies receiving the money.

Tai Siang said he was shocked to learn in September 2015 that the house had been advertised to be auctioned, whereupon he lodged a caveat to stop its sale. When Tai Sing's family, Freddy and Royston cancelled the caveat, he sued his two brothers.

Freddy and Royston denied they were holding Tai Siang's stake in trust for him and contended he had sold them his stake decades ago.

But the defence argued that Tai Siang had a gambling addiction and spendthrift lifestyle in his younger days, incurring debts for which his family had to bail him out. Tai Siang had in fact offered to give up his stake for urgent financial assistance, according to Freddy's lawyer, Mr Peter Madhavan.

Royston's lawyer, Mr Adrian Tan, also noted that when Tai Siang was made bankrupt in 1988, he declared he had no assets whatsoever. By waiting to file suit after his mother had died, Mr Tan contended, Tai Siang effectively ensured his version of events could not be disproved.

Mr Madhavan yesterday asked Tai Siang why he had never asked his mother for his share of the house back. "My mother was ill, and if the brothers are arguing, she will definitely be unhappy," he replied through a Mandarin interpreter.