Bad weather cloaks it from stargazers here; those in other places have better luck

They came out to see a supermoon - but all they got was gloom.

Singaporeans flocked to various parts of the island last night to try to catch a glimpse of the closest full moon to Earth since 1948, which stargazers promised would appear about 14 per cent bigger and 30 per cent brighter than usual.

However, many were left disappointed as rain and cloudy skies hindered its visibility. They will now have to wait until Nov 25, 2034, when it appears this size again.

Those elsewhere had better luck.

From Australia to Taiwan, stargazers around the world gathered at beaches and high-rise buildings to witness the highly anticipated phenomenon. In the United States, the National Aeronautics and Space Administration (Nasa) even offered tips to photographers on how best to capture the moon's luminosity.

Back home, Prime Minister Lee Hsien Loong took to Facebook earlier in the day to ask his followers to share their shots of the moon. Yesterday's phenomenon was dubbed as the closest full moon to date in the 21st century by Nasa. A supermoon happens when the full moon is within 90 per cent of its closest distance to Earth, which is about 356,500km. 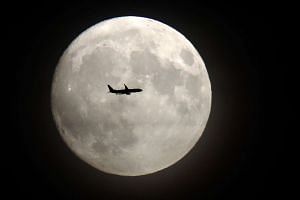 In Pictures: Spectacular supermoon lights up skies around the world 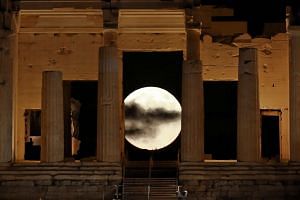 World looks up to gaze at extra bright 'supermoon'

A few events to view the supermoon were organised across Singapore yesterday. Many turned up hoping to capture photos of the rare occurrence but ended up with nothing.

Ten people showed up at an open space near Mayflower Market and Food Centre in Ang Mo Kio, but the event was cancelled slightly past 8.30pm when the rain got heavier.

Ms Gerarddyn Dde Britto, founder of Stargazing Singapore, which organised the event, said: "It is a little bit disappointing. We wanted to get a glimpse of the supermoon and to take pictures."

At another event, some 30 people turned up at Woodlands Galaxy Community Club. But they, too, left without catching sight of the moon. Despite this, Mr Shakir Othman, ambassador of its astronomy club, said participants were able to test the telescope at its observatory. He said: "We understand that it is not something we can control, so we tried to make the best out of the situation."

Engineer Leslie Teo, 28, who made a trip to Sentosa with his friends last night, left an hour before 9.52pm, when the supermoon was expected to be at its brightest. "We left when we realised that it just wasn't going to happen. It is a pity because this phenomenon doesn't happen every day. Maybe we will have better luck in 2034."

A matter of distance

A version of this article appeared in the print edition of The Straits Times on November 15, 2016, with the headline 'Supermoon treat, but not in S'pore'. Subscribe
Topics:
More
Whatsapp Linkedin FB Messenger Telegram Reddit WeChat Pinterest Print Purchase Article Copy permalink