SINGAPORE - Services for aged care in Singapore have been built up over the years, and there is now "sufficient capacity to meet demand", said the Ministry of Health (MOH) on Tuesday (Aug 14).

In response to a Lien Foundation report which said the Government has not provided enough facilities or subsidies for the rapidly ageing population, the MOH said in a statement that it is "on track to meeting our targets of 6,200 daycare places, 10,000 homecare places and 17,000 nursing home beds by 2020".

It added that since 2015, the ministry has service guidelines as a reference for all service providers, be they run by private companies, charity organisations or the Government, so they can "work towards delivering good quality care for seniors". It also carries out service audits to ensure this.

It added that it is "reviewing the need for more formal regulation" under the upcoming Healthcare Services Act.

It said it plans to take a risk-based approach "so that the provision of safe and good quality serivce does not add excessively to regulatory costs for providers, and consequently raise the cost of care for seniors".

The Lien Foundation report, released on Tuesday, also stressed the importance of preventive care, citing how a rapidly greying Singapore could see the number of Singaporeans aged 65 and above doubling to a million by 2030.

The report said more attention needs to be paid to help seniors age in place, and highlighted areas such as funding, capacity, affordability, manpower and regulation as key areas of focus. 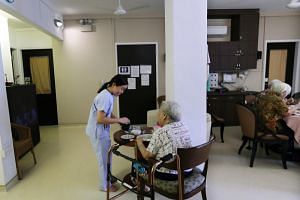 In its statement, the MOH said the Community Network for Seniors (CNS) - which involves government bodies, voluntary welfare organisations and volunteers teaming up to visit seniors - aims to do just that.

Silver Generation Ambassadors also reach out to seniors, linking them up with befriending services as well as social and healthcare support for the frail.

Under the umbrella of CNS, over 360 neighbourhoods hold weekly active ageing programmes.

By the end of April this year, more than 7,000 seniors have undergone functional screening to check their eyes, teeth and hearing.

The MOH said: "Going forward, we are reaching out to more community partners to make active ageing programmes and functional screening more accessible to seniors in the community."

The statement said the ministry recognises the important role played by caregivers and offers respite options ranging from weekend care at 11 eldercare centres to longer-term care from several days to a month at more than 40 nursing homes.

The Lien Foundation study found that cost is a concern, pointing out that while the majority of people want to age and be cared for in the comfort of their own homes, rather than in institutions, the costs of community care can be considerable.

The MOH said there is up to 80 per cent subsidy for seniors who qualify, and for those who still can't afford such care, Medifund, the social safety net, will step in.

The ministry said more can be done to help caregivers, and it is working on providing more options and better support.

It has also committed $2 billion to support the proposed CareShield Life scheme, which will launch in 2020 for those aged 30-40 years, and 2021 for older people.

The money provides premium subsidies for the long-term care insurance, which pays at least $600 a month for those who are severely disabled.

The MOH said it would study the views and ideas raised by the Lien Foundation in its report.

"We welcome constructive conversation on these important and pressing issues as we continue to work with partners and stakeholders to strengthen the provision of home and community care services," it added.