SINGAPORE - Singapore ministers have hailed the strengthening of defence ties between Singapore and Australia following the announcement of a landmark pact between the two countries.

The agreement, announced on Friday (May 6) morning, will see both sides cooperate more closely in the areas of security, trade, education and the arts and culture.

A joint combat training drill, codenamed Trident, will also be elevated as a signature bilateral exercise.

The security agencies on both sides will also enhance their sharing of intelligence and information in areas such as counter-terrorism. 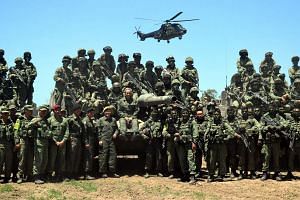 In a Facebook post on Friday, Defence Minister Ng Eng Hen hailed the agreement, saying that more training areas for Singapore troops “will sharpen the SAF to one of the most well-trained and proficient militaries in the region, to keep Singapore and Singaporeans well protected”.

“Last year, I visited SAF troops training in Shoalwater Bay Training Area and celebrated our 25th Anniversary there. This precious training land allows thousands of soldiers from infantry, armour, artillery, aircraft and helicopters to hone their skills together, over an area 3 times the size of Singapore. I told the press then that my wish was for more SAF troops to be able to train there.

“Today, that wish has come true! PM Lee Hsien Loong and PM Malcolm Turnbull have announced new initiatives under the Comprehensive Strategic Partnership Agreement between both countries. MFA, Mindef and MTI have been hard at work over the last few months and have now settled on a mutually beneficial package,” he wrote.

Minister of Foreign Affairs Vivian Balakrishnan said the boosting of defence ties attests to the level of strategic trust between both countries that are building on their history of good cooperation.

It also shows “alignment” in the way both countries view the world and the need for security, peace and stability in South-east Asia, Dr Balakrishnan told the media.

Dr Balakrishnan said that the new agreement will “catalyse, encourage and facilitate” the ongoing cooperation and collaboration between both countries’ security agencies. 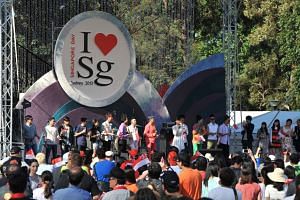 He added that the Australians are interested to learn from Singapore which is “a successful model of a multi-cultural country that has to deal with this clear and present threat of terrorism and extremism”.

“The way we order ourselves, the way we organise our society, the way we deal with terrorist threats, the religious rehabilitation programme that we have. All these make us interesting and relevant for Australia,” said Dr Balakrishnan, adding that it too is a multicultural society.

“Obviously everyone has to devise their own ways. But there are lessons we can learn, ideas we can pick up from each other. So that’s why this is another field which they are very keen to work with us.”

The Sydney Morning Herald reported that the expanded military training areas will be in Shoalwater Bay and Townsville. This will also allow Singapore to send up to 14,000 troops Down Under for training, up from the 6,000 a year now. The report also said that the troops will stay for up to 18 weeks, longer than the 60 days that they currently stay.

Australian reports had earlier said that Singapore would spend up to A$2.25 billion (S$2.26 billion) under the defence deal that will give Singapore troops access to more military areas for 25 years.

Asked about this, a Singapore Defence Ministry spokesman said on Friday: “The amount is indicative and sets a cap on the life-cycle costs over 25 years for advance training facilities to be jointly developed and used by both militaries.”

Since 1990, Singapore troops have been training Down Under to hone their skills, with the Singapore Armed Forces conducting its largest unilateral exercise every year in Shoalwater Bay, Queensland. In last year’s 65-day drill, more than 4,000 personnel and 400 different platforms were put through their paces in the training area that is three times the size of Singapore, with terrain including rugged outback, bushland and mountains.

In all, a dozen countries are used for training, including the United States, Germany, India, Brunei and New Zealand.

While Singapore builds up its defenses and does its best “to be strong individually”, it also has to build a network of friends and good, reliable partners, said Dr Balakrishnan.

“Australia fulfils all that criteria,” he added.