As rules for public entertainment spots are tightened, several MPs called for more stringent guidelines for outlets near residential areas or in mixed-use developments.

They were among 11 MPs who spoke on the Public Entertainments and Meetings (Amendment) Bill, which was passed yesterday. All supported the changes to the law.

Ms Lee suggested that police impose conditions on entertainment establishments to prohibit employees from being scantily clad. In reply, Parliamentary Secretary for Home Affairs Amrin Amin said "such conditions are already in place and employees have to be decently attired when carrying out their duties".

Mr Yong noted residents in his constituency said bouncers at entertainment venues may ask patrons to smoke or fight outside the outlets, so they avoid getting demerit points or violating licensing conditions.

He asked: "Would the police also consider setting up surveillance cameras outside selected public entertainment outlets... where these outlets co-exist with residences?"

Singapore has a highly dense urban environment and it is difficult to impose minimum distances between public entertainment and other land use types. A case-by-case approach is taken in such matters.'' 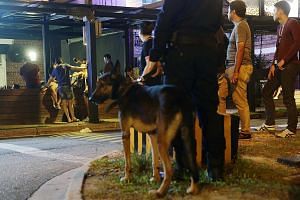 Nominated MP Randolph Tan also urged the Home Affairs Ministry to take a stronger stand in addressing "negative issues that are associated with such establishments", as the Bill deals with what occurs on their premises but incidents may take place in their vicinity.

"Licensees should take reasonable steps to respond to incidents that originate from their premises even if they spill out of the premises," Mr Amrin said.

Security officers found to be the cause of fights could have their licences revoked, he added.

Meanwhile, Ms Phua urged the Government to consider adopting a "whole-of-government approach" to ensure a more "appropriate" tenant mix of licences and businesses in residential estates. She also suggested that the building of mixed developments be reconsidered, as "nightclubs, massage parlours, bars and other entertainment spots in buildings with residents living above are most likely the sources of complaints and conflicts".

Replied Mr Amrin: "Singapore has a highly dense urban environment and it is difficult to impose minimum distances between public entertainment and other land use types. A case-by-case approach is taken in such matters."

A version of this article appeared in the print edition of The Straits Times on May 09, 2017, with the headline 'Sterner rules urged for outlets near homes'. Subscribe
Topics:
More
Whatsapp Linkedin FB Messenger Telegram Reddit WeChat Pinterest Print Purchase Article Copy permalink