While there is no law against reselling concert tickets, ticket agencies have said they have measures in place to prevent the practice, including invalidating resold tickets.

The issue has again come into the spotlight recently, when tickets to singer Ed Sheeran's November concert were reportedly listed for as much as $13,000 each online, more than 50 times the face price.

Ticketing agency Sistic told The Straits Times that it works closely with venues and promoters to identify scalpers and unauthorised reselling.

It declined to share details of its procedures to "maintain the effectiveness of the methods in place".

But when unauthorised resellers are identified, the agency notifies them that they are violating the terms and conditions of purchase, and that the promoter has the right to invalidate the tickets if they do not remove the listings.

Said a Sistic spokesman: "We have been successful in getting many of those offers taken down."

AEG Presents, which is organising Sheeran's concert, said unlawful resale would lead to seizure or cancellation of the tickets without refund or compensation. But it did not say exactly how it would do so.

Tickets to singer Ed Sheeran's November concert were reportedly listed for as much as $13,000 each online, more than 50 times the face price. 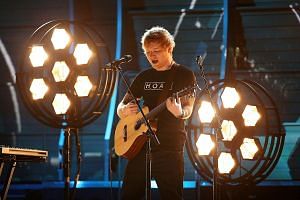 Meanwhile, a spokesman for Rock Records, which owns concert organiser One Production, said it would work with its ticketing agent to void tickets and deny entry to a venue if it detects unauthorised resales.

Live Nation Lushington, which organised Coldplay's concert earlier this year, tried to curb the scalping problem by voiding a number of tickets found on the resale market.

The concert promoter will be bringing One Direction member Harry Styles' show to Singapore in November. Tickets are non-transferable and have the name of the purchaser printed on them.

But this did not stop tickets from going on sale on Viagogo. After tickets through official channels were sold out, scalpers offered them on Viagogo for thousands of dollars.

In Queensland, Australia, ticket scalping is an offence for events at specified venues. A person can resell or purchase tickets from resellers only if the price is no more than 10 per cent above the original.

The Queensland police are responsible for enforcing the law, and can issue on-the-spot fines to anyone committing a ticket scalping offence. Both buyers and sellers face penalties, though sellers face a higher maximum fine.

In London, members of the House of Lords have put forward amendments to the Digital Economy Bill that could render the online ticket resale business illegal. There are also proposals to strengthen the Consumer Rights Act. One of the suggested amendments is for resellers to require written authorisation from organisers.

The Guardian reported in February that the offence would carry a maximum fine of £5,000 (S$8,900), which could wipe out the profit on ticket resales, if strictly enforced.

Singapore lawyer Gloria James told The Straits Times that a legislative initiative would be a good way to curb ticket scalping.

She suggested providing statistics to ministers, or getting the public's response to the idea of laws being passed. "Then, at least a decision can be made as to (whether) laws should be put in place," she said.

"By having laws put in place, greed and exploitation can come to an end," she said, adding that concertgoers would reap the benefits.

A reseller on online marketplace Carousell, who agreed to speak to The Straits Times on the condition of anonymity, said legislation would deter people like him.

He bought four concert tickets and was asking for more than double the original price for them.

Referring to comments from some potential buyers that the prices were too steep, he said: "Just because they find it unreasonable that they have to pay such high prices... does not mean no one else is willing to pay."