SINGAPORE - Singaporeans from all walks of life recounted fond memories of former president S R Nathan as they paid their last respects to him on Thursday (Aug 25) at Parliament House where his body is lying in state.

Service engineer S. Sathanatham, 48, was the first in line at 7.30am, more than two hours before Parliament House was opened for the public to pay their respects.

"I came early because I expect there will be a long queue," he told The Straits Times.

"My son goes kart racing. In 2009, President Nathan signed his helmet because a family friend passed it to him. We kept that helmet and my son used it just once. So this is the least I could do. Mr Nathan was also part of the old guard who did a lot for this country."

A 700-strong group from the labour movement, led by labour chief and Minister in the Prime Minister's Office Chan Chun Sing, was also among the early birds.

"His heart has always been for the common folk, the people who need the most help," said Mr Chan of the former president after paying his respects.

What the young can learn from Mr S R Nathan 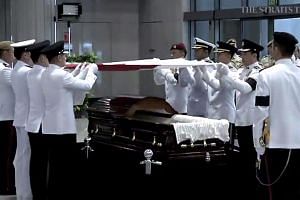 Mr Hareenderpal Singh, 28, president of the Union of Security Employees, said: "Mr Nathan was also a union leader, and he united all the unions together. He was a very inspirational leader and we felt that paying our respects was the least we could do as a show of our solidarity as a union."

At 10am, a steady stream of people started to enter Parliament House.

First among them were President Tony Tan Keng Yam and his wife Mary Tan.

"Mr S R Nathan will be sorely missed by Singaporeans. His heart and commitment to Singapore is an inspiration," said Dr Tan, after paying his respects.

In memory of S R Nathan: He will be sorely missed, says President Tony Tan

Veteran opposition politician Chiam See Tong, 81, who arrived in a wheelchair, stood up briefly as he paid his respects. He also spoke to Mr Nathan's family.

The mother of four said she had met Mr Nathan twice - the first, when her children performed at the Istana in 2004 with their primary school, and the second at a mosque event.

"He advised us as parents to encourage our children," said a tearing Madam Rohani. "He was very nice."

In memory of S R Nathan: Mother of 4 Rohani Dukiran in tears as she recounts meeting him

A group of pupils and staff from Northland Primary were also there.

Principal Tony Tan said the pupils had a sharing session on Wednesday about Mr Nathan's life.

Mr Tan said it was important to bring the children to pay their last respects as it was an opportunity to learn about what Mr Nathan had done for Singapore, and the values that he held.

According to Acting Minister for Education (Higher Education and Skills) Ong Ye Kung, students and representatives from 120 schools will be paying their last respects to Mr Nathan on Thursday.

Members of Parliament such as Tin Pei Ling, Louis Ng and  Cheng Li Hui also came to pay their respects.

As of 6pm, about 14,000 people have paid their respects in Parliament House, according to the State Funeral Organising Committee.

The Committee prepared water, umbrellas and fans for the people queueing. There were also wheelchairs on standby for the elderly and those with disabilities.

At around 8.30pm, Ms Lim Gui Xian, 23, turned up with more than 100 waffles for the people leaving the Padang. Ms Lim, who runs a waffle stall, said it was her mother's idea.

She took five hours to make the waffles, which came in five  flavours - red bean, peanut, ham and cheese, cream cheese and chocolate. Her mother, Madam Alice Lim, 54, had met Mr Nathan once in the early 2000s, she said.

Mr Nathan, who died on Monday at age 92 after suffering a stroke, made his final journey to Parliament House on Thursday morning. The casket bearing Mr Nathan's body left the family residence at Ceylon Road at 8.45am.

The casket was received by Speaker of Parliament Halimah Yacob as a nine-man coffin bearer party transferred the casket into the building and onto the bier.

In the highest honour accorded to a leader, the state flag was draped over the casket, with the crescent and stars lying over the head and close to the heart of Mr Nathan, who was Singapore's sixth and longest-serving president.

Mr Nathan's body will lie in state ahead of the state funeral service on Friday afternoon.

Five uniformed officers will keep vigil over the casket - in the highest form of respect to the deceased.

People can pay their last respects to Mr Nathan at Parliament House on Thursday from 10am to 10pm.

The funeral service will be held at the University Cultural Centre from 3pm to 5pm on Friday.

On Wednesday, a stream of national leaders, former colleagues and family friends paid their respects on the second day of the private wake held by Mr Nathan's family at his home.